How the Estate Tax Works 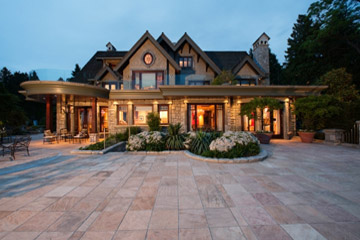 The estate tax was designed to make sure the federal government got its piece of the country's largest estates -- but who pays?
Compassionate Eye Foundation/Barry Calhoun/Getty Images

From its inception in 1916, the federal estate tax in the United States has been used to generate tax revenue from the transfer of wealth between deceased family members and their descendants. The tax is calculated as a percentage of the total value of the estate's assets (cash, investments, real estate and more) minus a variety of deductions, including charitable contributions. In 2012, the top estate tax rate is 35 percent. Dubbed the "death tax," the estate tax has been the target of sharp criticism from tax reform proponents for decades.

This tax is nothing new. The ancient Egyptians were the first to tax the transfer of wealth upon death circa 700 B.C., and about 2,000 years ago Roman Emperor Caesar Augustus taxed the inheritance of money by all but immediate family members [source: Jacobson, et al]. In the United States, the first estate and inheritance taxes were temporary measures to raise revenue during wartime. (For more information on the difference between the two, take a look at How Inheritance Tax Works.) The first was the Stamp Act of 1797, which taxed wills and distributions of "legacies" to raise money to fight an undeclared naval war with France. Similar revenue-raising measures were employed during the Civil War and the Spanish-American War, but all were quickly repealed once the wars were over [source: Jacobson, et al].

The late 19th and early 20th centuries saw the rise of the super-wealthy -- industrial magnates and tax-dodging "holding companies" that threatened to consolidate the wealth of the nation in the hands of a powerful few. Led by trust-busting progressives like President Theodore Roosevelt, the government pushed through tax measures to distribute the wealth more fairly. The 16th Amendment to the Constitution, passed in 1913, established the first federal income tax. And in 1916, Congress approved the first federal estate tax on estates valued over $50,000 [source: Jacobson, et al].

From the beginning, the estate tax has always been reserved for a slim minority of American estates. For the 2011 tax year, an estimated 3,300 estates will owe estate taxes, representing 0.1 percent of all deaths in America [source: CBPP]. The other 99.9 percent of deaths will result in no estate tax at all. That's because 99.9 percent of American estates are valued at less than $5 million, and under 2012 tax law, only the value of an estate that exceeds $5 million is taxed. If your estate is worth $5 million or less, you don't pay a cent.

So who exactly are the 0.1 percent of Americans that pay the estate tax? We'll take a closer look on the next page.

Who Pays the Estate Tax?

Under 2012 tax law, the Internal Revenue Service (IRS) requires the executor of an estate valued at more than $5 million to file an estate tax return (Form 706, if you're curious) within nine months of a person's death. That $5 million exclusion threshold was set by the Tax Relief, Unemployment Insurance Reauthorization, and Job Creation Act of 2010, but the exclusion hasn't always been so high.

In 1940, estates valued at $40,000 or more were subject to estate tax, and even as recently as 2000, an estate worth more than $675,000 owed estate taxes [source: Jacobson et al]. The Bush-era tax cuts chipped away at the estate tax, gradually increasing the estate tax exclusion from 2001 through 2009 -- to a high of $3.5 million -- before repealing the estate tax entirely in 2010. The current $5 million exclusion was the result of a hard-fought compromise between legislators who wanted to kill the estate tax for good and those who argued its importance for paying down the national debt.

Because the exclusion threshold has changed significantly over the years, the estate tax has affected different segments of the U.S. population. When the exclusion was lower, a broader population was subject to the tax, including middle-class households that had invested wisely and saved a significant nest egg. From 2001 to 2010, as the threshold continuously increased, the number of estate tax returns filed dropped from 108,000 to 15,000 [source: Internal Revenue Service]. In its current form, the estate tax affects only the wealthiest Americans. According to research by the Urban-Brookings Tax Policy Center:

To put those percentages into perspective, the Tax Policy Center estimates that only 8,600 Americans of the 2.5 million who died in 2011 will leave estates with a gross value over $5 million [source: Tax Policy Center]. But that doesn't mean that each of those 8,600 estates will actually owe money in federal estate tax. The tax code allows for a number of significant deductions and credits, lowering the taxable net value of the estate below $5 million.

One of the biggest deductions is for charitable contributions. According to Internal Revenue Service (IRS) statistics, an average of 24 percent of estates valued at $1 million or more left money to charitable institutions like religious organizations, educational institutions and other non-profits. Of that 24 percent of estates, each gave away an average of 20 percent of its total assets [source: Jacobson et al]. Other deductions that lower the taxable value of the estate are: any assets that are passed on to a surviving spouse; unpaid debts at the time of death; funeral expenses; any estate or inheritance taxes paid to state governments.

Speaking of tax rates, what's the difference between the marginal estate tax rate and the effective rate? We'll take a closer look on the next page.

A popular criticism of the estate tax is that it taxes income twice. While this might be the case for regular earned income, it is not the case for long-term capital gains. The wealthiest estates hold over half of their assets in stocks, bonds and other long-term investments [source: Brunet]. Capital gains are only taxed if they're realized, meaning the investments are sold for profit during the person's lifetime. Without estate taxes, descendents could sell those investments without paying any tax on the often significant capital gains those stocks and bonds represent.

At first glance, even the relatively "low" 35 percent estate tax rate sounds pretty high. After all, the highest income tax rate is also 35 percent. What is important to note is that nobody really pays a full 35 percent of the value of their estate. The effective estate tax rate -- the actual amount that people pay in estate tax -- is around 14.4 percent under 2012 tax law [source: Brunet].

Why is the effective tax rate so much lower than the marginal estate tax rate of 35 percent? The first reason is because there are so many deductions and credits available to estates. As we mentioned earlier, estates can deduct any assets left to a spouse, all charitable contributions, funeral and estate administration expenses, outstanding debts, and more. If a large portion of your assets are from a small business or farm, you can take even more deductions. The estimated effective tax rate for farm and small business estates is only 7.4 percent [source: Brunet].

Another reason the effective tax rate is so low is because the exclusion threshold is so high. Remember, under 2012 rules, only assets that exceed $5 million are taxed. So if your estate is worth $7 million, you're not taxed 35 percent of $7 million. You are taxed 35 percent of $2 million. And if you're married, the exclusion threshold is doubled to $10 million, exempting all but the wealthiest estates.

For lots more information on inheritance taxes, wills and estate planning, explore the links on the next page.

Critics of the estate tax complain that it unfairly targets family farms with large business assets like land, machinery and animals. To pay the estate tax, critics argue, the farms will have to liquidate these assets. The Tax Policy Center estimates that fewer than 50 family farms will owe estate tax in 2011 -- and the total tax burden will be less than $10 million [source: Tax Policy Center]. According to a report by the Congressional Budget Office, only 8 percent of family farms didn't have enough liquid assets to pay estate taxes in 2000, back when the rate was 55 percent of assets over $675,000 [source: McClelland].

Like many of the tax topics I've covered for HowStuffWorks, this one is saddled with political controversy. It's difficult to find unbiased sources of information that explain the costs and benefits of the estate tax without devolving into political sermonizing. Thankfully the Internal Revenue Service (IRS) and some independent tax policy analysts did the heavy lifting for me. The estate tax is famously called the "death tax," and for good reason. It's not exactly a tax for dying, but it could be called a tax for dying rich. The latest tax law bumps the exclusion threshold for the tax up to $5 million for individuals and $10 million for married couples. While the "death tax" was a reasonable threat to the middle class back in the 1990s, it's now the exclusive headache of the wealthy. I was surprised and not a little heartened to learn that only 3,300 estates are expected to owe estate tax for tax year 2011.