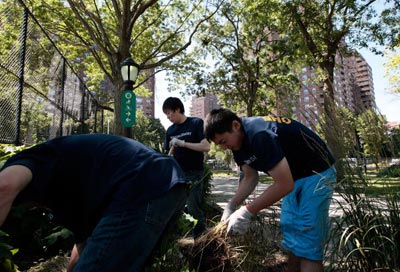 People are going green in droves, but has this movement already peaked?
Chris Hondros/Getty Images News

Back in 2007, so-called green investing became all the rage. With mutual funds like the Sierra Club Stock Fund and the Portfolio 21 Fund, investors could spread their dollars among environmentally friendly corporations and startups that develop alternative energy technologies. A few green technology companies saw their stock prices rise 150 percent or more over the 12 months between July 2006 and July 2007 [source: MarketWatch].

When stock prices soar into the stratosphere, it's a sure sign to many economists that an unsustainable bubble is forming. Some of those economists claim that the green bubble is being inflated by the federal government [source: Brady].

As part of the American Recovery and Reinvestment Act, the U.S. Congress voted to invest nearly $30 billion in programs like a "smart" national electricity grid, the "greening" of federal buildings, low-income home weatherizing and green job training [source: WhiteHouse.gov].

In The New Republic magazine, conservative commentators Ted Nordhaus and Michael Shellenberger claim that the green bubble has already been popped by the current global financial crisis. The authors cite a survey from the Pew Research Center for the People and Press, which found that the number of Americans who listed the environment as their "top priority" dropped from 56 percent to 41 percent from January 2008 to January 2009 [source: Nordhaus].

If the green bubble has indeed sprung a leak, it could mean widespread failure for many aspiring green technology companies, much like the victims of the dot-com bust. But is that necessarily a bad thing? Newsweek magazine columnist Daniel Gross says, "No."

The dot-com boom led to heavy commercial investment in high-speed networking infrastructure, online payment systems and cyber-security. Even after the dot-com collapse laid waste to thousands of companies, that infrastructure was still in place to pave the way for the second wave of success stories like Google and Facebook [source: Gross].

Perhaps the same thing will happen with the green bubble. If a dozen new car companies spring up in a race to build the most fuel-efficient electric car, most of them will probably fail. But as Gross jokes, who's going to care once we're cruising around in a stylish sedan that gets 300 mpg (127.5 kilometers/liter) on the highway and 258 (109.6 km/l) in the city?