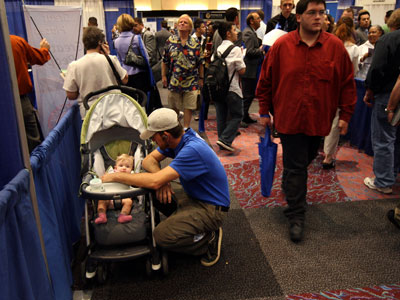 A father tends to his daughter while his wife looks for work at a job fair in Colorado in September 2008, after unemployment hit a seven-year high. See more recession pictures.
John Moore/Getty Images

In 2008, the United States teetered on the brink of financial disaster. Unemployment looked to reach its highest levels in two decades [source: Boston Globe]. Homeowners defaulted on their loans in record numbers. Enormous investment banks that had been in business for more than a century and had endured the Great Depression faced collapse. The economy, in other words, was circling the drain. And all of it, every last part of this looming economic disaster, was due to a unique financial instrument called the mortgage-backed security.

Mortgage-backed securities (MBSs) are simply shares of a home loan sold to investors. They work like this: A bank lends a borrower the money to buy a house and collects monthly payments on the loan. This loan and a number of others -- perhaps hundreds -- are sold to a larger bank that packages the loans together into a mortgage-backed security. The larger bank then issues shares of this security, called tranches (French for "slices"), to investors who buy them and ultimately collect the dividends in the form of the monthly mortgage payments. These tranches can be further repackaged and sold again as other securities, called collateralized debt obligations (CDOs). Home loans in 2008 were so divided and spread across the financial spectrum, it was entirely possible a given homeowner could unwittingly own shares in his or her own mortgage.

It sounds innocuous enough, and it is. It's also an excellent and safe way to make money when the housing market is booming. And in the early 21st century, the U.S. housing market was booming. A person who bought a new home in January 1996 for $155,000 could reasonably expect to make a profit of $100,000 when selling it in August 2006 [source: U.S. Census Bureau, CNN Money].

But 2008 wasn't 2006; the housing market in the United States was no longer booming. And it was the mortgage-backed security that killed it. 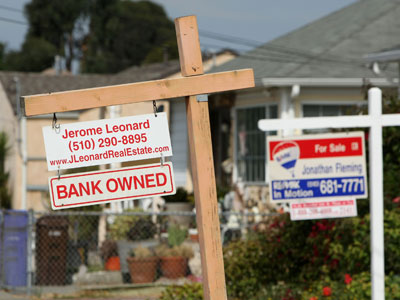 How the Mortgage-Backed Security Brought Down the Economy 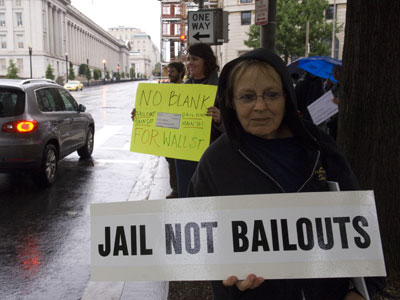 When the foreclosure rate began to increase late in 2006, it also released more new homes on the market. New home construction had already outpaced demand, and when large numbers of foreclosures became available at deeply discounted prices, builders found that they couldn't sell the homes they'd built. Richard Dugas, CEO of Pulte Homes, a building company, said in September 2008, "We can't afford to compete with foreclosures at 40 percent to 50 percent off" [source: Builder].

The presence of more homes on the market brought down housing prices. Some homeowners found themselves in the precarious state of being upside-down in their payments; they owed more than their homes were worth. Simply walking away from the houses they couldn't afford became an increasingly attractive option, and foreclosures increased even more.

Since MBSs were purchased and sold as investments, defaulted mortgages turned up in all corners of the market. The change in performance of MBSs took place rapidly, and as a result, most of the biggest institutions were laden with the securities when they went south. The portfolios of huge investment banks, lousy with mortgage-backed securities, found their net worth sink as the MBSs began to lose value. This was the case with Bear Stearns. The giant investment bank's worth sank enough that it was purchased in March 2008 by competitor JPMorgan for $2 per share. Seven days before the buyout, Bear Stearns shares traded at $70 [source: USA Today].

Because mortgage-backed securities were so prevalent in the market, it wasn't immediately clear how widespread the problem from the subprime mortgage fallout would be. During 2008, a new write-down of billions of dollars on one institution or another's balance sheet made headlines daily and weekly. Fannie Mae and Freddie Mac, the government-chartered corporations that fund mortgages by guaranteeing them or purchasing them outright, sought help from the federal government in August 2008. Combined, the two institutions own about $3 trillion in mortgage investments [source: AP]. Both are so entrenched in the U.S. economy that the federal government seized control of the corporations in September 2008 amid sliding values; Freddie Mac posted a $38 billion loss from July to August of 2008 [source: Reuters].

Fannie Mae and Freddie Mac are an example of how every part of the economy is related. When things are bad at Fannie Mae and Freddie Mac, things are bad for the housing industry. Lenders issue home loans and sell them to one of the companies or use the loans as collateral to borrow more money; the role of each giant is to infuse cash into the lending industry. When Mac and Mae won't lend money or purchase loans, direct lenders become less likely to lend money to consumers. If consumers can't borrow money, they can't spend it. When consumers can't spend money, companies can't sell products; low sales means lessened value, and so the company's stock price per share declines. Businesses trim costs by laying off workers, so unemployment increases and consumers spend even less. When enough companies lose their values at once, the stock market crashes. A crash can lead to a recession. A bad enough crash can lead to a depression; in other words, an economy brought to its knees.

U.S. Farmers Eye Hemp as a New Cash Crop
How Hedge Funds Affect You Even If You Don't Invest in One
U.S. Politicians Prioritize Coal Mining Jobs Above Other Industries, Despite Data