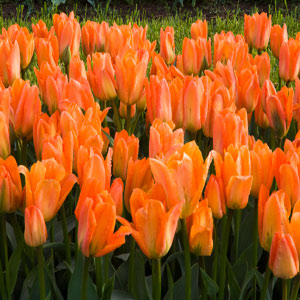 One of the first economic bubbles revolved around the tulip. See images of better ways to invest your money.
Willard Clay/Getty Images

In the early 1600s, tulip mania hit Holland hard. The elegant and exotic flower, which had recently arrived to the tiny European nation via trade routes from the Ottoman Empire, was so prized by the aristocracy that the demand for the rare bulb caused prices to skyrocket.

By 1636, the tulip was being traded as a commodity on several Dutch stock exchanges, leading to widespread market speculation [source: Investopedia]. People spent exorbitant sums to get their hands on a bouquet of tulips in order to "flip" them to an even bigger sucker. Then one day, without explanation, the pool of suckers suddenly dried up. Mass panic ensued and prices fell through the floor as people became more and more desperate to sell [source: Frankel].

The Dutch tulip craze is one of the earliest recorded examples of an economic bubble. A bubble is created when any asset -- be it tulips, homes or Internet startups -- is allowed to irrationally and unsustainably increase in value [source: Cronin].

In the late 1990s, the United States witnessed the inflation and subsequent deflation of the dot-com bubble, marked by outrageous market speculation on the value of unproven Web companies. Most recently, the global economic crisis was spurred largely by the collapse of the housing bubble after a meteoric increase in the price of real estate.

From a purely economic perspective, bubbles aren't necessarily bad or good [source: Koba]. They're just natural extensions of free market forces. Humans, for better or worse, tend to flock wildly to the latest hot idea. When speculation on that idea reaches a tipping point, the market corrects itself, often with devastating results.

When the housing bubble collapsed, for example, the Dow Jones Industrial Average lost nearly half its value between October 2007 to March 2009 [source: Yahoo! Finance].

The real trick with bubbles is predicting which will be the next one to pop. If the goal of investing is simply to buy low and sell high, then you want to catch a bubble right when it reaches its peak, then sell before everyone else realizes the same thing.

Keep reading as we discuss what many analysts and experts believe are the next big bubbles to go bust.