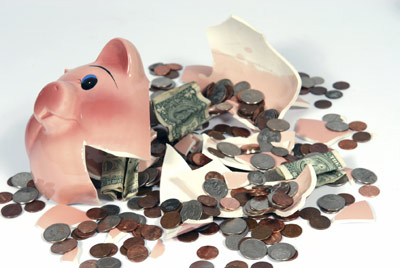 When it comes down to breaking open the piggy bank, it's time to figure out just how much it takes to live on. See more banking pictures.
iStockPhoto/Steve Snyder

If you've ever been strapped for cash, you've probably thought about the value of a dollar and the importance of making it stretch. Faced with a financial disaster or a hemorrhaging bank account, suddenly the memories of blowing savings on extravagant iPod accessories come rushing back. In the midst of researching the resale value of iPod gloves, it strikes you that it's time to reduce expenditures and simplify your life to make ends meet. But just how much money does it take to get by? To find out, we have to distinguish needs from wants. That can be a difficult task.

Even when headlines report bad news about unemployment rates and ballooning inflation, the poorest people in developed economies are doing better than most of their ancestors did. Economist Julian Simon says that there may be no free lunch, but at least it's getting cheaper and cheaper [source: Simon]. We don't have to live like monks and take a vow of poverty to live comfortably. But, on the other hand, as our standards of life skyrocket, so do our expectations.

For example, most of us couldn't go without our cell phones for one day. When asked if we really need them, we can argue "for my job" or "in emergencies." We probably won't die without them. But such a utilitarian definition of "needs" arguably takes the life out of living.

So where do we draw the line when we budget? Do we make allowances for our physical and mental health? Although we may get rid of gym memberships and days at the spa, should we cut healthy-but-pricey foods from grocery lists and stop the occasional trip to the movies?

Then there's the saving face factor. Economics expert Adam Smith argues that social embarrassment plays a part in determining necessities of life [source: Smith]. For instance, if not owning a microwave oven makes other people think you live in poverty, it counts as a necessity from a social persp­ective. But people got along fine without microwaves for millennia.

Although it's nearly impossible to determine a definitive dollar amount to answer our question, it'll help to look at one standard: the United States Census Bureau's poverty threshold. 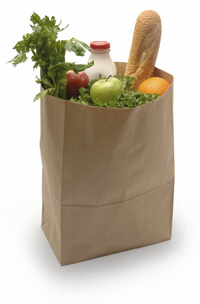 Governments routinely measure poverty, but finding the most appropriate standard is difficult and controversial. Some nations gauge relative poverty -- compared to other people or the median income. Other nations, like the United States, measure absolute poverty -- based on the costs of essential items like food and housing.

To help us draw the line, in the 1960s, research analyst Mollie Orshansky created the basic formula that the U.S. still uses to determine the amount of money sufficient to live on. It uses the prices of food items that make up an adequate diet, based on the Department of Agriculture's guidelines. After adding up a year's worth of food, Orshansky multiplied the cost by three -- relying on a 1955 study that showed that a household spends a third of its income on food [source: Michael]. The resulting number represents the before-tax income one person could reasonably live on.

However, some people raise objections to this method when it comes to determining who ranks as "poor." They say that the cost of living varies depending on whether a person lives in a rural or urban region. Other people say that the poverty threshold is outdated and point to studies showing that currently only one-seventh of the American family's spending is for food [source: CSM]. Yet other people argue that a person's income should include government assistance programs like food stamps, so that we can more accurately assess whether government programs ease poverty problems [source: CBS].

­You may be surprised to learn that 97 percent of America's poor own televisions and that 62 percent have cable or satellite programming [source: Rector]. Some people consider these statistics evidence that the threshold is too high. Other people believe that additional factors are at work behind these reports. Both excessive social pressures and the accessibility of credit may encourage people who are already struggling to make unnecessary purchases.

Despite the complications and variables involved in determining exactly how much one person needs to live, there are a few factors to consider when assessing your needs. To find out how much you're currently spending, read How Fixed Expenses Work and How Non-Fixed Expenses Work, then try our Monthly Cash Flow Calculator.

In addition to discovering the amount of money it takes to live on a day-to-day basis, it's smart to consider emergencies and retirement needs.

To get down to the nitty-gritty, let's take a look at some tips to help us live within our means.

­The U.S. poverty threshold can help us gauge if poverty is decreasing or increasing.

However, opponents cite the effects of a minimum wage hike on businesses, who will likely lay off workers and decrease hours for the remaining employees to offset the increased cost [source: Sherk].

Living Within Your Means 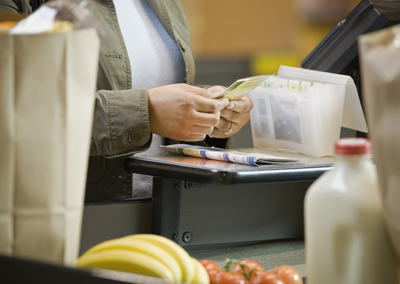 Coupons can take a large chunk out of your weekly grocery costs.
Andersen Ross/Iconica/Getty Images

Whatever your financial status is, if you want to make ends meet, it always helps to become more financially educated. There are several ways to do this. Thanks to the information superhighway, we have countless resources right at our fingertips to help us. Shopping around and finding budget-saving secrets is easier than ever. Here are a few ideas:

Buy generic: Maybe they don't look fun and appetizing at first, but if you examine the ingredients, you'll find that generic products are often almost identical to brand-name ones. Even if it means saving the old brand-name boxes and planting generic products inside to fool your family (or yourself), buying generic is a smart choice. Keep this in mind when buying prescription drugs: Generic drugs and brand-name drugs are chemically the same but have different names [source: FTC].

­Use coupons: Most likely, you can find coupons for many of the items that you buy on a regular basis, taking a chunk off the cost. Investing a few minutes in finding coupons will save you money. But just because you find a coupon for double-chocolate-chunk cookies doesn't mean you should buy them, which leads us to the next point.

Don't buy it just because it's on sale: Whether you are on a weekly grocery store trip or are clothes shopping at the mall, you're probably going to spot a tempting sale. Even if the sale is a great bargain, it's still best to pass unless you really need it or it's likely to save you from buying a similar item at a much higher price later.

Cook: Rather than eating out at restaurants, cooking at home can save money. This doesn't just apply to dinner, either. If you prepare lunches to bring to work, you can save a good deal more -- some people estimate $960 a year on lunch alone [source: Kiplinger].

One of the challenges of buying food on a budget is making sure that you and your family get a proper diet without breaking the bank. Healthy foods notoriously cost more. But there are ways to eat nutritiously on a budget. For example, some cheap-but-healthy choices include an egg per day for protein and canned rather than fresh tomatoes, as canned contain more of the antioxidant lycopene [source: Fortin].

These tips are just a taste of what you can do to save money. Once you know how to save, the key is to stay disciplined. Check out 10 Tips for Staying on Budget for ideas. Conquering bad spending habits is always harder than it sounds. When you're on a strict budget, it's wise to ask yourself every time you pick up an item, "Do I really need this?" How Discretionary Expenses Work will help you decide.

For even more budgeting and savings articles, check out the links on the next page.