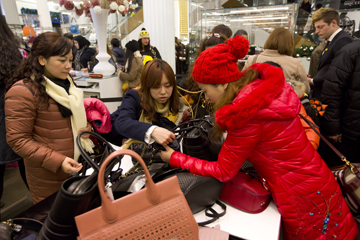 Some people feel America should do away with paying income tax altogether and switch to a national sales tax of 10 to 25 percent on all goods and services.
JUSTIN TALLIS/AFP/Getty Images

Even more controversial than the flat tax is the idea of abolishing the federal income tax entirely by repealing the 16th Amendment. In place of an income tax, some propose the use of a national sales tax. Many countries around the world levy a national sales tax, also called a value-added tax or VAT. The difference is that most of those countries also collect income taxes. The U.S. backers of a national sales tax want to get rid of the IRS and charge a flat 10 to 25 percent on all retail purchases of new goods and services [source: Montgomery].

Proponents of the so-called Fair Tax — a version of the national sales tax — include a provision called a pre-bate. This is a monthly check mailed by the government to lower-income families to subsidize their purchases. Advocates of a national sales tax also argue that a consumption tax collects revenue from everyone, even illegal immigrants, tax dodgers and tourists from other countries [source: FairTax.org].

Opponents of a national sales tax say it would put an unfair burden on the middle and lower classes, who buy a lot of the products that would be taxed. It might reduce consumer spending, thereby slowing the economy. They add that in order for a national sales tax to be fair, it should be applied to the purchase of stocks and bonds in addition to consumer goods. Under the Fair Tax proposal, investments are not taxed, although brokers' fees would be [source: FairTax.org].

Taxes are a bitter subject in almost every country, and the United States has had a decidedly tumultuous relationship with the issue. America has one of the most complicated tax systems in the world, and it grows more complex every year. In the end, whether you agree with paying taxes or not, you probably have April 15 circled on your calendar, embedded in your brain and on your list of dreaded days.

For more information on taxes and related topics, check out the links below.