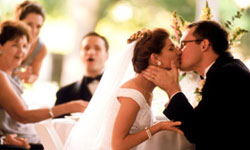 Marriage is a beautiful thing, but is it still so great at tax time? See more pictures of kisses.
Spike & Ethel/Getty Images

When it comes to taxes, is marriage a penalty or a bonus? That's a tough one. If a married couple pays more in income tax when filing jointly than they would've paid as two single people, that's called the marriage penalty. Despite legislation to eradicate the marriage penalty, there are still marriage traps lurking in the tax code. For example, if both spouses work, any income over $139,350 is taxed at a 28 percent rate. If that same couple was still single, they could each earn up to $83,600 (for a total of $167,200) and still remain in the 25 percent tax bracket. That's a pretty wide gap.

But studies show that despite all of the noise about the marriage penalty, more than half of married couples actually pay less in taxes than they would if they were still single [source:Weston]. That's called a marriage bonus. The marriage bonus is largest when one spouse makes a lot more money than the other, but there are other situations -- like estate transfers or selling a home -- in which your marriage status can save you serious bucks on tax day.

Keep reading for our list of the five subtle and sometimes significant ways that marriage spells tax relief.