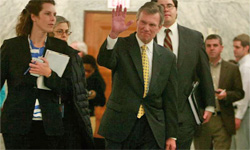 Tax ­mistakes can happen to anyone -- just ask President Obama. At last count, at least four nominees to Obama­'s administration were found to owe back taxes. Tom Daschle, nominated to head the U.S. Department of Hea­lth and Human Services, owed more than $100,000 in taxes related to unreported income and untaxed limousine service. News of the unpaid taxes led Daschle to withdraw himself from consideration for the position. Tim Geithner, Obama's secretary of the Treasury, faced fierce criticism for his failure to pay $34,000 in taxes related to his work for the International Monetary Fund, among other things. Tax issues also hindered or derailed the nominations of Obama's picks for U.S. trade representative (Ron Kirk) and chief performance officer (Nancy Killefer).

You might (or might not) be inclined to cut the president's nominees some slack. After all, the official U.S. Tax Code now numbers more than 70,000 pages long and grows thicker every year. That's the equivalent of more than 33 Oxford American dictionaries [source: ­Reuters]. Clearly, it's difficult to keep up with all of these constantly changing rules and regulations­.

You don't need to be a tax accountant, however, to avoid some of the most common mistakes people make when filing their returns. While most of these mistakes won't land you in a jail cell next to Bernie Madoff, they might cause you a few headaches as you deal with delays in your refund check or pay penalties and interest. So without further ado, and in no particular order, let's get on to some tax doozies that you won't commit after reading our list.