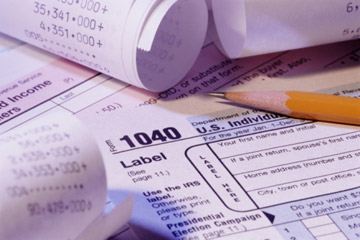 If you don't make much money, the Earned Income Tax Credit can help you put more cash in your pocket. See more pictures of taxes.
Elizabeth Simpson/Getty Images

The next time you find yourself bemoaning your tax burden or the size of your refund (or lack thereof), ask yourself one question: Do I qualify for the Earned Income Tax Credit?

If question marks just appeared in a bubble over your head, we're here to help. The Earned Income Tax Credit (EITC) is a tax credit available to working Americans with low incomes. It is specifically designed to keep individuals and families out of poverty while encouraging people to work. And it works! In 2010, the EITC was credited with keeping 6.6 million Americans above the poverty line [source: Internal Revenue Service]. That's more than any other anti-poverty program, including food stamps, housing subsidies, WIC, free school lunch or energy assistance [source: Short]. In 2010, 26.8 million Americans received an EITC, for a total of $59.5 billion [source: IRS].

To qualify for the EITC, you have to earn very little money relative to the size of your family. The maximum you can report in earned income is $49,078 if married and filing jointly or $43,998 if filing individually -- and that's only if you have three or more children. The income limit decreases if you have fewer children or no children to support. If you are single with no children, you have to make less than $13,360 to receive the EITC [source: Internal Revenue Service].

The EITC was created with the Tax Reduction Act of 1975. From the beginning, it was designed to benefit low-income families with children by offering a fully refundable tax credit. What does it mean to be fully refundable? Like the Child Tax Credit, the EITC can reduce a taxpayer's tax liability to below zero, resulting in a refund [source: Tax Policy Center]. And if you owe no income tax at all -- which is true for many low-earning households -- then you get to keep the full amount of the EITC. The EITC was written into the tax code specifically to offset payroll taxes (Social Security and Medicare) that eat away at wages [source: Forman].

Unlike other "welfare" programs, the EITC encourages work by requiring some level of earned income. In fact, the amount of the credit increases with income to a certain level, after which it begins to decrease or "phase out." For example, if you have one or more children, you'll receive the maximum tax credit if you earn a little over $15,000 but not more than $20,000 a year. For every dollar you earn over $20,000, your tax credit will decrease [source: Internal Revenue Service].

As with any IRS program, the EITC comes with a long list of complicated rules, restrictions and rate tables. To clear up some of the confusion, we'll start by explaining exactly who qualifies for the EITC and who does not.