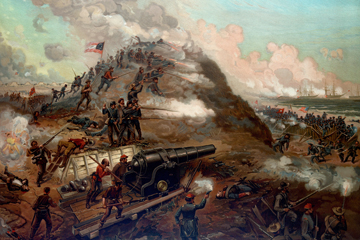 The first income tax was instituted by Congress to help pay for the American Civil War.
Universal History Archive/Getty Images

In 1863, the federal government collected the first income tax. This graduated tax was similar to the income tax we pay today. Those who earned $600 to $10,000 per year paid at a rate of 3 percent. Those who earned in excess of $10,000 paid 5 percent. A flat-rate tax was imposed in 1867. Five years later, in 1872, the national income tax was repealed altogether since the Civil War was long over and revenue needs had declined. The federal government went back to relying mainly on tariffs and excise taxes, such as liquor taxes [source: U.S. Dept. of Treasury].

Spurred on by the Populist Party's 1892 campaign to reduce high tariffs, Congress passed the Income Tax Act of 1894 to make up the difference. This act taxed 2 percent of personal income that was more than $4,000, which only affected the top 10 percent. The income tax was short-lived, as the U.S. Supreme Court struck it down only a year after it was enacted. The justices wrote that the income tax was unconstitutional because it failed to abide by a constitutional guideline. This guideline required that any tax levied directly on people must be levied in proportion to a state's population [source: Our Documents].

In 1913, the income tax became a permanent part of the U.S. government. Congress avoided the constitutional roadblock mentioned above by passing a constitutional amendment. The 16th Amendment reads, "The Congress shall have power to lay and collect taxes on incomes, from whatever source derived, without apportionment among the several States, and without regard to any census or enumeration." The 16th Amendment gave the government the power to levy taxes on people regardless of state population. The Underwood Tariff Act of 1913 included an income-tax section that initiated the progressive system we use today: Those who earned more than $3,000 ($4,000 for married couples) were subject to a 1 percent tax, which increased depending on income and topped out at 7 percent [source: IRS].

During World War II, the federal government began withholding taxes, also known as the pay-as-you-earn taxation system. This gave the government the steady flow of money needed to finance the war effort.