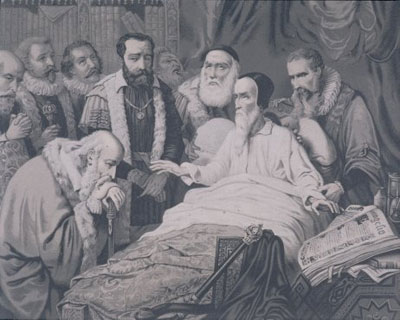 Deathbed wills must be witnessed by two or more people.
The French School/Getty Images

There are several different types of wills that are recognized as legal and binding in probate. Oral wills are spoken to a witness instead of written down. This type of will is common when someone feels like there isn't enough time to draft a document. Many times, armed service members in active combat will make an oral will, witnessed by their fellow soldiers. This situation is one of the more common ones that a probate court will recognize as legitimate in cases of oral wills. As you can imagine, there is great opportunity for fraud and misinterpretation of oral wills. They aren't recommended.

If you're faced with certain death, you might draft a deathbed will. While they can be binding, these wills are more difficult to prove legal and are the most common wills to be challenged. People often challenge deathbed wills on the grounds of the mental capacity of the testator, with the argument that the individual can't be of sound mind when facing imminent death. A deathbed will is also commonly filled with errors because of how fast it's made. Even if mistakes aren't made, possessions can be overlooked, leaving them to be divided by the court.

If paying a lawyer seems like an unnecessary expense, you can always use a form book or Web site to help draft a do-it-yourself (DIY) will. The numerous guides to creating your will can be very helpful, but it's still important to do follow-up research on your state's regulations and possibly have an attorney go over the will to make sure it's legal. Many people make the mistake of assuming the fill-in-the-blank forms or Internet Web sites are foolproof and once they're deceased, it's too late to do anything about it. Getting an attorney's stamp of approval on your DIY will is still less expensive than hiring a lawyer to draft it for you.

When speed of execution is important, self-probating wills can be a real time saver. When the will is created, witnesses sign sworn statements that verify the will was created and signed in their presence, and that the testator was of sound mind at the time. Without these statements, the witnesses must be contacted by the executor and are usually required to appear in probate to provide in-person testimony before the will can even be filed. As you can imagine, this can draw out the entire process and create stress on your family. Self-probating wills that are drafted with the aid of an attorney are the most solid and least likely to be successfully challenged.

Wills can be, and often are, contested by family members of the deceased. We'll look at that process in the next section.