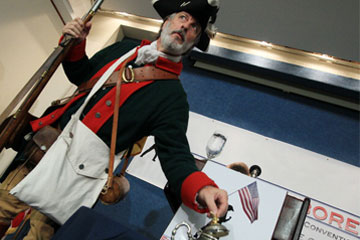 Though Occupy Wall Street claims to represent the 99 percent of the American public who are economically disenfranchised compared to the wealthiest 1 percent, that same super majority doesn't support the cause. Since its first march on Sept. 17, Occupy Wall Street has attracted as much -- if not more -- opposition as it has support. According to a November 2011 poll from Connecticut-based Quinnipiac University, more Americans view Occupy Wall Street unfavorably (39 percent) than favorably (30 percent); a third of those surveyed had yet to make up their minds [source: Good].

Ironically, the group that shares Occupy Wall Street's potent disgruntlement with the federal government is also the source of the movement's harshest criticism. In 2009, the grassroots conservative Tea Party organized marches and rallies in opposition to excessive government spending. Instead of dressing up as zombies in business suits like the Occupy activists, Tea Party supporters donned Revolutionary-era tricorne hats and breeches as they picketed for a balanced federal budget, lower taxes and other platforms. Initially cast off by the mainstream media as an insignificant fringe group, the Tea Party gradually garnered political influence, as exemplified by the Congressional Tea Party Caucus [source: Travis].

The Occupy Wall Street protesters officially claim no political affiliation, and a majority self-identify as independent voters, but they're characterized as a left-wing, liberal conglomeration. And as the growing gap between the rich and poor in the United States has expanded, the American political landscape has become more polarized between conservatives and liberals. So, just as the Tea Party represented the uprising of extreme political conservatism, some consider Occupy Wall Street to be the other side of that coin, vocalizing the demands of extreme political liberalism [source: Good].

Occupying public spaces doesn't sit well with some of the Republican- and Tea Party-affiliated electorate because they perceive it as little more than lazy whining. In early October 2011, conservative Erik Erickson started the Tumblr blog "We Are the 53 Percent," lambasting the "99 Percent" movement for demonstrating against Wall Street rather than pursuing employment [source: Khimm]. The "53 Percent" symbolizes the percentage of Americans who pay federal income tax, which subsidizes the unemployed; the "53 Percent" bloggers also assume that Occupy activists are jobless, and therefore benefiting indirectly from federal income taxes.

But the ultimate question for the Occupy Wall Street movement is whether it can have any long-term effect where economic power in the United States ultimately resides: Washington, D.C.