Is it true that 1 percent of Americans control a third of the wealth? 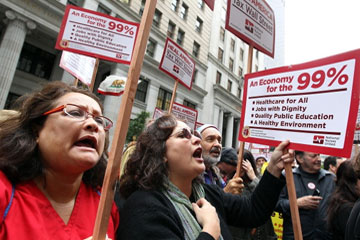 "We are the 99 percent!" is the populist cry of the Occupy Wall Street protestors and their compatriots around the country. The slogan is meant to highlight the growing wealth gap between a small amount of super-rich individuals -- constituting only 1 percent of the entire U.S. population -- and the other 99 percent of us. Where does this figure come from? The statistic that's frequently quoted by protestors and the media claims that the richest 1 percent of Americans control a third of the country's total wealth. But is this true?

First, it's important to make some distinctions. This statistic is specifically referring to wealth, not income. Income is how much money you earn in a given year. Wealth, also known as net worth, is the cumulative value of all of your assets minus your debts. What qualifies as an asset? Cash in the bank, investments (stock, bonds, CDs, 401(k)s, IRAs, etc.) real estate, jewelry, art, collectibles and anything of tangible value. Debts would include outstanding mortgage debt, student loan debt and credit card balances.

It's important to make a distinction between income and wealth because income inequality and wealth inequality aren't equal. According to research originally done by economists Thomas Piketty and Emmanuel Saez, the top 1 percent of income earners took home 17.67 percent of the total income -- less than a fifth -- of everyone in the U.S. in 2008 [source: Alvaredo et al]. To qualify as the top 1 percent of earners, you need to make a little more than $500,000 in cash income in 2011 [source: Rampell].

Why is the wealth disparity so pronounced? Because it's easier to get richer when you already have a lot of money. Wealthier people can save and invest more of their money, while people of humbler financial means spend most of their paycheck on food, the mortgage, credit card bills, utilities, child care and all of the other costs of daily life, which leaves little to invest in the stock market or feed that 401(k). The Economic Policy Institute points out that in 2007, at the height of the economic bubble, half of Americans owned no stock [source: Allegretto].

Tax policy also further widens the gap between the wealthiest and the rest of us. Earnings from capital gains -- the sale of stock and other investments -- are taxed at a lower rate (15 percent) than regular income [source: Appleby]. So people who make a lot of investment income get to keep more of that money than people who rely exclusively on wages.

Interestingly, the wealth gap in the U.S. is nothing new. According to the Economic Policy Institute, the wealth gap has increased by a mere 2.2 percentage points since 1962 [source: Allegretto]. The rich, apparently, have always been a lot richer. What's more alarming is that income levels have grown at increasingly uneven rates in recent decades. According to a 2011 report by the Congressional Budget Office, the income for the top 1 percent of earners grew by 275 percent from 1979 to 2007, while the income for middle-class Americans (the 21st through 80th percentile) grew by less than 40 percent [source: CBO].

For more information on money and wealth, see the links on the next page.