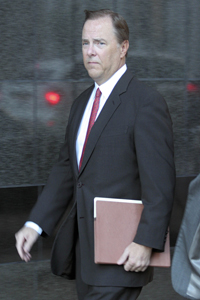 Back in 2001, Enron Energy CEOs Kenneth Lay and Jeffrey Skilling led one of the most egregious cases of corporate deception in American history. As leaders of the company, the pair borrowed a lot of money, incurred a lot of bad debt and drove the company into bankruptcy. They also hid all of this through creative accounting practices that artificially inflated the company's share price. Skilling shed $47 million of his own company's stock before the share price could fall [source: Bloomberg].

Perhaps worst of all, Skilling and Lay encouraged investors and employees to continue pumping money into the company even as they knew about the company's imminent demise; more investment only helped the share price they sold their stock for. In all, Enron stockholders lost about $25 billion [source: Public Citizen]. Many of these were Enron employees who lost their retirement savings and were sentenced to, as the judge who gave Skilling 25 years in prison said, "a life sentence of poverty" [source: Barrionuevo].

This is what is considered corporate malfeasance, the act of a corporation or corporate executive committing a crime (or at least a morally reprehensible, but legal act). What follows are 10 more examples of what a person might do if given the chance to make more money.