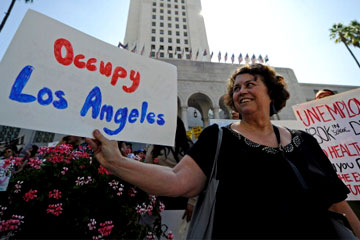 The first major milestone Occupy Wall Street accomplished was to fan the protest flames beyond the island of Manhattan. On Sept. 24, 2011, a small group started Occupy Chicago in Grant Park, although police peacefully arrested 130 protesters on Oct. 23, citing violation of a city ordinance [source: Rodriguez]. Run-ins with law enforcement like that have largely fueled publicity for the movement, inspiring others to occupy at local encampments in other cities and towns in displays of solidarity.

For instance, one early incident that supercharged the Occupy movement happened on Oct. 1, as thousands of demonstrators marched across the Brooklyn Bridge in New York. The police reportedly made more than 700 arrests, allegedly only removing people who were intentionally blocking thoroughfares [source: Chappell]. Perhaps influenced by the dramatic dedication to the Occupy cause displayed during that cross-borough march, less than a week later, copycat protests had sprung up around the nation, including ones in Boston, Memphis, Houston, San Francisco and Hawaii. On Oct. 18, activists at Zuccotti Park celebrated the one-month anniversary of the movement they helped start. By then, the protests -- and their demands for government and corporate accountability -- also had crossed international borders, with public space occupations both large and small in more than 951 cities in 82 countries, including the following:

For the most part, the Occupy offshoots in the United States remained peaceable, with activists at some sites, such as Occupy Chicago and Occupy Atlanta, often volunteering to get arrested for symbolic reasons if an encampment violated local ordinances. Occupy Oakland, on the other hand, became one of the most controversy-stoking protest hubs, with law enforcement clashing more forcefully with protesters. On Oct. 26, Iraq War veteran and Occupy Oakland participant Scott Olsen was sent to the hospital in critical condition, after allegedly being struck in the head with a police projectile. When the incident occurred, Olsen had been demonstrating against Oakland police who were in the process of clearing out two occupy stations [source: Gabbatt].

Olsen's injury only reinvigorated protesters, however, and Occupy Oakland launched a general city strike on Nov. 3, 2011. Thousands marched through the city and effectively shut down the Port of Oakland, the fifth-largest business port in the United States, for nearly 24 hours [source: Memmott].