Occupy Wall Street Principles: What does the 99 percent want? 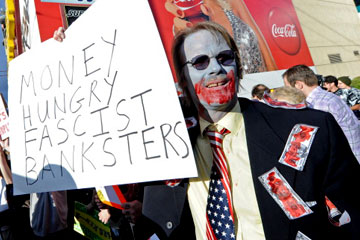 Following the initial Sept. 17, 2011, Occupy Wall Street rally, the media descended upon Zuccotti Park to figure out just what the renegades wanted. What they found -- no official leaders or spokespeople, a hodgepodge of protest slogans on signs, a left-wing aesthetic -- tended to elicit confusion rather than credibility. What, journalists continued to question, does the 99 percent want?

The Adbusters blog post inciting the Occupy movement demanded a Presidential commission on corporate malfeasance and a top-down severing of ties between Washington and Wall Street [source: Adbusters]. But like the roots of the global economic recession and widespread unemployment, the Occupy Wall Street platforms that emerged in the movement's nascent days weren't exactly cut-and-dried. On Sept. 29, 2011, the New York General Assembly in Zuccotti Park passed an official "Declaration of the Occupation of New York City" outlining the group's grievances against the government and corporations, as well as their cornerstone rallying cry: "Exercise your right to peaceably assemble; occupy public space; create a process to address the problems we face, and generate solutions accessible to everyone" [source: OccupyWallStreet].

In that way, Occupy Wall Street functioned not only to arrest the attention of the people in power who, in protesters' estimations, had faltered ethically, but also to engage the rest of the public affected by that questionable decision-making. Judging from Occupy Wall Street's ripple effect, sprouting similar activist groups in more than 80 countries by mid-October 2011, it served as a stimulus for peaceful assembly as a visible, symbolic form of criticism against economic and corporate powers. The manifestations of those powers' perceived faulty leadership -- a depressed housing market, joblessness, international military operations -- are manifold, but the method for protesting against them, as modeled by Occupy Wall Street, was intentionally simplistic and replicable in any location.

But with 14 million people unemployed in the United States in October 2011 and the global economic crisis stagnating, has Occupy Wall Street accomplished anything aside from mucking up a park in New York?

Just like the "Arab Spring" public uprisings in Tunisia and Egypt, the actions and organization of Occupy Wall Street have taken shape and spread across social media sites, especially Twitter and Tumblr. For that reason, The Economist magazine refers to Occupy Wall Street as the "first true social-media uprising" in the West [source: Boudreau]. A pro-Occupy Web site, FeedtheProtest also accepts donations in a virtual currency called bitcoins. As of Oct. 3, 2011, the site had collected 70 bitcoins, or $350, in funding [source: Woolley].