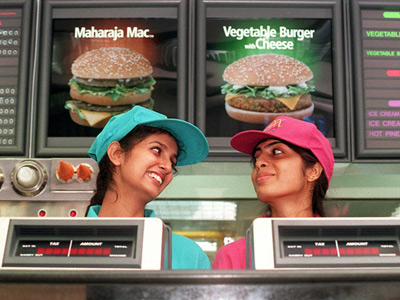 When in Rome … McDonald's adapts itself to the palates and religious preferences of the culture they enter. In India, they put out variations of their classics but without beef.
AFP/Douglas E. Curran/Getty Images

First, McDonald's is known for donating heavily to Ronald McDonald House Charities (RMHC). This charity offers lodging to parents so that they can be close to a child who is receiving medical treatment far from home. McDonald's restaurants often include donation boxes where customers can donate to the charity to fund the house, the Care Mobile Program and the Family Room Program -- rooms in hospitals that can include TVs, computers, and kitchens where pediatric patients and their families can relax. Because McDonald's Corp. provides much of the costs to run the global office of RMHC, most of the donations benefit the local chapter or programs [source: RMHC].

McDonald's can counter accusations of perpetuating globalization with the menu adaptations it has made for its restaurants in various countries. In India, for instance, it offers culture-specific selections and got rid of beef to accommodate Hindus who don't eat it. In a process dubbed glocalization, McDonald's attempts to promote its brand while keeping local cultures intact.

­Some people contend that McDonalds does affect the cultures it touches, but rather than hurting them, the restaurants actually benefit these cultures with lifestyle improvements. In "Golden Arches East," author James L. Watson credits McDonald's with raising the standards of bathroom cleanliness in Hong Kong. Before McDonald's started setting up restaurants there in the 1970s, the majority of public restrooms were filthy by some standards. But the popularity of McDonald's restaurants' clean bathrooms caused other restaurants to permanently maintain higher sanitation practices.

In the same book, Watson argues that the introduction of a new kind of food and food service in China encouraged customers to take on better table manners. The exotic experience and atmosphere of McDonald's encouraged patrons to be more polite [source: Kristof]. Standing in line at a restaurant was something new to Hong Kong when McDonald's restaurants came on the scene. Some people say this practice encourages equality over social hierarchy. Watson explains a theory that argues that a sense of equality is developed when both customer and server are standing in this kind of setup [source: Watson].

In response to critics who claim the company has a negative effect on local communities, McDonald's and its supporters argue quite the opposite. The company's Web site touts the work that McDonald's does for communities, providing benefits like jobs and revenue [source: McDonald's Corp.]. Some people contend that globalization -- the very phenomenon that McDonald's is attacked for spearheading -- helps people in developing economies climb out of poverty [source: Meredith].

To help the company climb out of a bad reputation, the McDonald's cleanup crew has been working to improve the public image, which we'll discuss next.

In his book, "The McDonaldization of Society," George Ritzer explains how the U.S., and many other nations, have progressively adopted McDonald's practices -- efficiency, calculability, predictability and control -- into other aspects of business and society. As a result, some countries like Germany (via express transportation carrier, DHL) and Sweden (via home furnishing giant, IKEA), are McDonaldizing by spreading their cultures throughout the world through their businesses [source: Ritzer].