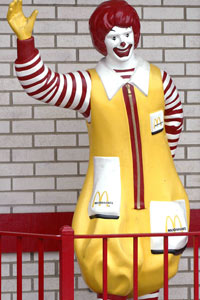 Ronald McDonald was popular with kids as soon as he was introduced in the '60s and he's been instilling brand loyalty ever since.
Tim Boyle/Getty Images

This business plan gave Ray Kroc the success and leverage he needed to get the loan to buy out the McDonald brothers in 1961. By 1963, Kroc opened his 500th McDonald's restaurant. Also in that year, he introduced Ronald McDonald, a clown originally played by actor Willard Scott, who was famous for playing Bozo the Clown. This marked the beginning of McDonald's instilling brand loyalty in customers at a young age, a practiced it would later be attacked for.

In 1965, the company went public, and Kroc made $3 million. Two years later, he took McDonald's restaurants outside the U.S. to Canada, and eventually to Europe and Asia. His wealth would amass to $500 million in the following 10 years [source: Basic Books]. Twenty years after it went public, McDonald's was included in the 30-company Dow Jones Industrial Average. The McDonald's Web site boasts that the company has been a wise investment, saying about $2,000 worth of stock in 1965 would translate to more than $3 million worth in 2006 [source: McDonald's Corp.].

As we've seen, McDonald's is drenched in the business of real estate as much as it is in food. And, as we've all heard, the three most important elements of real estate are "location, location, location." Back in Kroc's days with the company, he would fly around in a plane or helicopter looking for the best spots to set up McDonald's restaurants. He specifically looked for land near schools and churches in a community [source: Kroc].

Today, as most of us can see, McDonald's restaurants are everywhere. But there's still a method to the madness. McDonald's typically looks for locations that are the most convenient for people -- in malls, near colleges or in airports [source: McDonald's Corp.]. This strategy continues Kroc's tradition of getting to the heart of a community through its gathering places.

Let's get to the nitty-gritty: McDonald's looks for intersections with traffic signals -- typically corners of two well-trafficked streets -- and ample parking. In terms of physical space, developers look for a site larger than 32,000 square feet (9,753 square meters) and a height of 22 feet (6.7 meters) [source: McDonald's Corp.].

After the franchisee and the site are lined up, the restaurant is built. You may have noticed that the architecture of McDonald's restaurants has begun to evolve away from the classic double-sloped roof. Many new restaurants are popping up with sleeker looks. These include restaurants with a cafe-style interior featuring lounge chairs to go along with the McCafe line of specialty espresso drinks. The immortal arches that don the facades have also been replaced by what's known as the "swish eyebrow," a yellow arch over a restaurant [source: Gogoi].

Modern drive-thrus incorporate displays to verify orders and some even have two order stations to speed up the process.
Tim Boyle/Getty Images

­Today's McDonald's restaurants -- whether cafe-style or not -- still incorporate classic production line procedures in the kitchen. Each employee is typically in charge of a certain task so that orders are filled quickly, but technology has come a long way since Multimixers. New technology has made the process even faster and more convenient for the customer. In the drive-thru, for instance, McDonald's restaurants now have digital displays where the driver can look at his order. Increasingly automated equipment, such as those that dispense drinks and make french fries, has also helped keep things moving faster. These are part of a long line of increasingly efficient practices since Kroc switched from fresh potatoes to frozen fries in 1966.

McDonald's amazed many when some of the restaurants began outsourcing their drive-thru order-taking to call centers. To make sure the right order got to each car, a camera hidden in the drive-thru menu took a photo of the driver placing the order and sent it to the restaurant employee who doled out the food at the pickup window. This innovation proved to increase production and efficiency [source: Fitzgerald].

But technology aside, the business wouldn't have succeeded so well without its famous menu, which we'll talk about next.