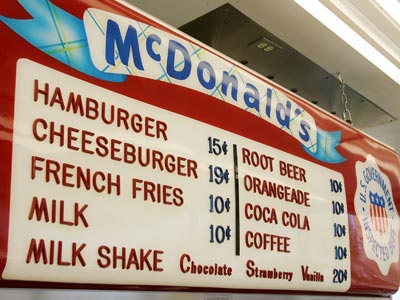 By simplifying their menu, the McDonald's brothers were able to speed up orders and bring in hordes of hungry customers.
Tim Boyle/Getty Images

McDonald's, the company that would come to represent what people love or hate about America, has humble roots in the Great Depression. In the 1930s, brothers Dick and Mac McDonald were struggling to make a living running a movie theater in California when they noticed that a nearby hot dog stand always seemed to do a lot of business. With a $5,000 loan, the McDonald brothers started the Airdrome hot dog stand in 1937 [source: Kroc]. By 1940, they moved it from Monrovia to San Bernardino and changed the name to McDonald's Barbeque [source: Young].

Despite success, the brothers wanted to do things better and faster. In a bold move, they temporarily shut down the place in 1948 and reopened with a new, experimental approach. They simplified the menu to focus on burgers, fries and milkshakes and got rid of those characteristic carhops, who were ubiquitous in the industry at the time. Adopting the process that revolutionized the auto industry, the brothers used an assembly line to prepare their food and improve the efficiency of the restaurant. They called it the Speedee System. The restaurant reopened to great success -- their risky move not only paid off but was to soon set the standard for success in the fast food industry.

The McDonald brothers were getting so much business that they needed eight Multimixers, machines that make five milkshakes at once. Today, a Multimixer sits as a museum piece in the replica of an early McDonald's.
Tim Boyle/Getty Images

In the next six years, business was doing so well that the brothers sold 21 franchises and opened nine outlets [source: Gilpin]. The original restaurant was bustling with so much business that the brothers ordered eight Multimixers -- machines that made five milkshakes at one time. The distributor of Multimixers -- a salesman by the name of Ray Kroc -- was so intrigued at this news that he traveled to California to see what the fuss was about.

Amazed and inspired at the success of the McDonald brothers, Kroc wanted in. He had dreams for the potential of McDonald's restaurants and asked Dick and Mac to hire him as their franchise agent. In exchange for licensing the name to him, the brothers would get a percentage of sales.

Kroc opened his first McDonald's restaurant in 1955 in Des Plaines, Ill. After some bumps in the road, Kroc was eventually successful, and in the next five years, he got 200 more restaurants off the ground [source: BBC]. Kroc was dedicated to the Speedee process that made the McDonald brothers so successful, and he used the motto of "quality, service, cleanliness and value." Some people say he was almost obsessed with cleanliness. Kroc often told workers, "If you have time to lean, you have time to clean" [source: Pepin].

Although Kroc's business deal with the McDonald brothers started swimmingly, relations soon soured. At first, Kroc just wanted to sell as many Multimixers as possible. But by 1961, he bought the entire business for $2.7 million. When they gave up rights to the McDonald's name, Dick and Mac reopened their original San Bernardino hamburger joint as The Big M. Kroc, upset over the brothers' refusal to relinquish the original restaurant, opened up a McDonald's restaurant nearby. The Big M was run out of business.­

Soon, using these tactics, Kroc made short work of the rest of the competition. Now in control of McDonald's Corp., he was ready to take on the world. Next, we'll delve into the business side of how Kroc built the McDonald's empire.

The McDonald brothers started off with a hot dog stand, so why doesn't McDonald's bring hot dogs back? In his autobiography, Ray Kroc wrote of his aversion to selling hot dogs because the mysterious meat products that go in them don't live up to the company's standard of quality [source: Kroc­].­