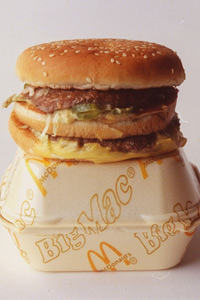 The Big Mac, invented by a McDonald's franchisee, was a huge success for the company.
Henry Groskinsky/Time & Life Pictures/Getty Images

Ray Kroc was a stickler for consistency and maintaining control of his restaurants. But, as his restaurants grew in number, he needed a way to efficiently instill his motto of "quality, service, cleanliness and value" into the franchisees who would be running them. So, in 1961, the same year that Kroc bought out the original McDonald's brothers, he established Hamburger University in the basement of a restaurant.

Today, Hamburger University, located in Elk Grove, Ill., has its own facilities and serves as a place where employees can earn a degree in Hamburgerology. It offers students college credit and is respected as a corporate training program [source: CBS.MW]. At Hamburger U. and 22 other training centers throughout the world, students can follow curricula for several career paths, including crew development, restaurant management, mid-management and executive development [source: McDonald's Corp.]. As we'll see, Kroc's faith in the talent of McDonald's managers paid off in spades when it came to several menu inventions.

In the 1960s, McDonald's sought a menu item that would tackle a particular dilemma: lagging Friday sales. Back then, most American Catholics were still abstaining from meat on Fridays throughout the year as a form of penance to commemorate the crucifixion of Jesus (a practice still common in some Catholic populations of the world). As a result, McDonald's was losing Friday customers to competitors like Big Boy, which had a fish alternative. To cater to Catholics, Ray Kroc wanted to introduce the Hula Burger, consisting of grilled pineapple on a bun. But in a test market run, another red meat alternative outperformed the Hula Burger in sales: the Filet-o-Fish. Invented by franchisee Lou Groen, the Filet-o-Fish was the first item added to the original McDonald's menu [source: Clark].

Perhaps the most important item, however, came from Jim Delligatti, the inventor of the Big Mac. This sandwich consists, as the immortal jingle puts it, of "two all-beef patties, special sauce, lettuce, cheese, pickles, onions on a sesame-seed bun" (with a third bun in the middle to contain the mess). In 1967, McDonald's Corp. granted Delligatti permission to introduce the Big Mac to his McDonald's restaurants in Pennsylvania. By the next year, after his Pittsburgh-area McDonald's restaurants started driving profits from the sandwich, McDonald's Corp. included it on the national menu [source: Reeger]. Needless to say, it was a huge hit for the company.

­The company got another breakthrough in 1973. This time, it was with a radically new item: a breakfast sandwich. The Egg McMuffin was made of a circular, broken-yolk egg with cheese and Canadian bacon on an English muffin. Herb Peterson, the owner-operator of six McDonald's restaurants, had already coined the company's first national ad slogan -- "Where Quality Starts Fresh Every Day" -- when he convinced Ray Kroc to try the sandwich [source: AP]. By perfecting other breakfast selections to accompany the McMuffin and retrofitting restaurants to serve breakfast, McDonald's prepared to venture into the fast food breakfast arena [source: Kroc].

Although the Filet-o-Fish, Big Mac and Egg McMuffin were inspirational concoctions of restaurant operators, the next big-ticket menu item came in a reverse process. Ray Kroc's sidekick, Fred Turner, who was chairman of the company, put in a request for his food supplier in 1979. Turner commissioned a "chicken finger-food without bones, about the size of your thumb" [source: Schlosser]. Food technicians got to work and gave him the Chicken McNugget, made of mostly reconstituted white meat chicken. It was immediately successful after its release in 1983.

But despite the popularity of its food, McDonald's has stirred up controversy.

McDonald's menu prices have been a key to its success since Dick and Mac's 15-cent hamburgers. Continuing this tradition, in 2003 McDonald's introduced the popular dollar menu, which features select items at a price of one dollar, including a double cheeseburger, small fries and possibly, a side salad. In 2008, however, McDonald's announced that it might have to adjust the menu to account for rising costs [source: Quinn].