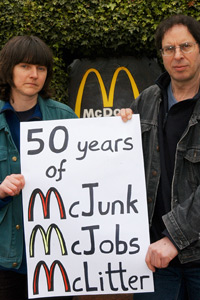 In the past few decades, McDonald's has come under attack for a variety of perceived offenses. One of the high-profile cases surrounds the temperature of its hot coffee. In the 1992 McDonald's Coffee Case, a customer sued McDonald's after she spilled coffee on her lap and suffered third-degree burns that hospitalized her for eight days. After hearing that McDonald's had received hundreds of other complaints and was previously aware of the problem -- and that its coffee is significantly hotter than homemade -- the jury made McDonald's pay compensatory and punitive damages [source: AAJ].

Another significant scandal had to do with McDonald's french fries. In 1990, when McDonald's announced it would no longer cook fries in beef fat, but rather in vegetable oil, this led many people to believe the fries were vegetarian. Later, vegetarians and Hindus were shocked to learn that the fries contain beef flavoring and sued. Although quick to point out that it never claimed the fries were vegetarian, in 2002 McDonald's agreed to dish out $10 million and apologized for confusion [source: AP].

In 2001, investigative journalist Eric Schlosser made waves with his book "Fast Food Nation." It is often compared to "The Jungle," the 1906 novel that blew the lid off the practices of the meatpacking industry. In his book, Schlosser attacked the fast food industry and targeted McDonald's in particular. He addresses many issues, from obesity to globalization. McDonald's unhealthy food, he claims, has been a major contributor to making America the fattest nation on earth. He also discusses its role in globalization -- what's considered the imperial spread of homogenized, industrialized culture to the entire world. He points to the conditions under which unskilled immigrants work in the meatpacking field and the anti-union tactics of McDonald's. He also attacks the company for instilling brand loyalty in kids from a young age.

Although Schlosser's book was a bestseller and hard-hitting expose´, many of its criticisms were nothing new. For decades, people have been blaming -- and occasionally suing -- McDonald's for what they say is its role in the obesity dilemma and for a slew of other issues. Perhaps most famous is the so-called McLibel Case. As far back as 1986, London Greenpeace started distributing pamphlets entitled "What's wrong with McDonald's."

The pamphlets accuse McDonald's Corp. of several perceived atrocities, including cruelty to animals, selling unhealthy food, targeting children in ads and contributing to the destruction of rainforests. One accusation concerned the company's negative impact on local communities throughout the world. It claims that the practice of buying land in developing countries for use in raising crops or cattle to export to industrialized societies takes away from people in those countries who are in need [source: McLibel Support Campaign].

In what would become the longest trial in England's history, McDonald's sued the two environmentalists for libel in the 1990s. Because the defendants were unable to prove every accusation, McDonald's ultimately won. But the trial was a public relations disaster for McDonald's, and its reputation suffered.

"Super Size Me" documentarian Morgan Spurlock took it upon himself to have a McDonald's-only diet for a month. The damage to his health alarmed viewers and caused backlash against McDonald's.
Jeff Snyder/FilmMagic/Getty Images

Since the McLibel case, public outcry and pressure on McDonald's has grown slowly but surely. A few years after Schlosser's "Fast Food Nation," McDonald's suffered another blow with "Super Size Me," a documentary by Morgan Spurlock meant to highlight the dangerous health effects of eating an excess of McDonald's food. In it, Spurlock uses himself as a guinea pig as he sets out on a 30-day experiment in which he eats nothing but McDonald's food and avoids exercise. The audience watches as he gains weight and doctors observe his health decline. Although he admits that it's a dramatization of realistic diets, Spurlock includes interviews and commentary that address the problem of obesity in America and the central role that fast food plays.

Despite these enormous setbacks, McDonald's has maintained its popularity. This is due in no small part to its attempts to salvage its damaged public image.