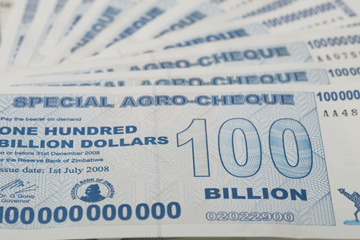 When a federal government finds itself in a bind, it's usually tempted to mint its way out of trouble. While printing money can solve many spending problems in the short term, it tends to present enormous long-term problems. The Zimbabwean dollar is an excellent example of this phenomenon.

In 2000, an exodus of much of Zimbabwe's labor pool led to a collapse of the country's financial system. To support public project spending, the government finance ministry printed surplus Zimdollars -- too many, in fact. Economically speaking, money is like any other commodity: It loses its value when there's an abundance of it. A surplus of readily available money in circulation leads to inflation, where money has less purchasing power. In the first decade of the 21st century, Zimbabwe's economy entered hyperinflation. Economists watching the startling loss of value of the Zimbabwe dollar estimated that it was losing value so quickly that its decline was equivalent to prices doubling in stores every 1.3 days. This puts the annual inflation rate Zimbabwe experienced by the end of 2008 at 516,000,000,000,000,000,000 (quintillion) percent, the highest in the world [source: Berger].

The Zimbabwean government decided to fight fire with fire and printed even more money in higher denominations. Eventually, the country would produce a $100 trillion Zimbabwean dollar note -- which had an exchange rate of about 30 U.S. dollars (USD) in January 2009 [source: BBC]. The government would go on to abandon its currency entirely, opting instead to adopt the U.S. dollar and South African rand as official currencies.

But what about all those trillion-dollar notes that the country's finance ministry produced in 2008? The government never collected the bills or let people exchange them, so no one knows the final tally in circulation. Indeed, the bills have become something of collectors' items and traders have stockpiled many, as they can fetch higher prices than what they were officially worth [source: McGroarty and Mutsaka].

Zimbabwe has shown how difficult it can be to keep track of how much money a single nation has in the global markets, let alone how much money there is in the world. However, this inherent difficulty hasn't stopped some from trying. Perhaps the closest estimate to how much money exists in the world was released by Mike Hewitt, editor of the economics blog DollarDaze.com. Hewitt tracked the reporting of 135 currencies from central banks and financial ministries in 167 countries. He found that in December 2010, these countries had notes and coins (M0) equaling $5.2 trillion in U.S. dollars in circulation [source: Hewitt]. The M2 figure was about U.S. $55 trillion. That's a lot of moolah. In October 2008, the M0 figure was $3.94 trillion, so you can see the amount of money in circulation is increasingly very rapidly. Wrote Hewitt, "Every increase to the existing money supply dilutes the value of the currency already in existence. In other words, those people holding paper money lose purchasing power to create value for the new money."

Things would be a lot easier on Mike Hewitt and foreign exchange market analysts if there was only a single currency used by every country on the planet. So why don't we?