Why are the penny and the nickel the only U.S. coins with images that don't face left? 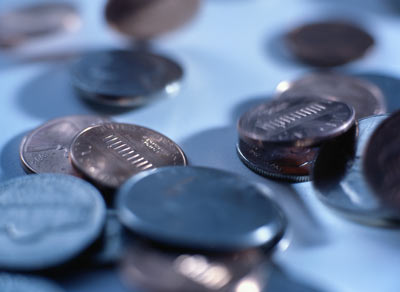 If you take an assortment of United States coins and look at them face-up, you'll notice that most of the portraits face left. The penny and the nickel, however, are different. Although there are several rather silly theories for why this is, the real explanations are pretty simple.

The Abraham Lincoln penny was minted in 1908 to commemorate the 100-year anniversary of Lincoln's birth. In 1907, President Theodore Roosevelt chose portraitist and sculptor Victor David Brenner to design the penny, probably because he admired Brenner's previous works of art. Those works included a bronze relief plaque bearing a portrait of Lincoln. Brenner adapted this design for the "heads," or obverse side of the penny. He based the plaque on a photograph of Lincoln taken on Feb. 9, 1864 by Anthony Berger. Lincoln faced right in the photo, so he faces right on the plaque and faces right on the penny.

Thomas Jefferson, on the other hand, started out facing left on the nickel in 1938. In 2003, the President enacted a law to revise the nickel in order to commemorate the bicentenary of the Lewis and Clark expedition and the Louisiana Purchase. The U.S. Mint made this revision into a series. On the 2004 nickel of the series, Jefferson still faces left and only the reverse side of the nickel changed to reflect its theme. On the 2005 nickel, Jefferson faces right, with the word "Liberty," based on his own handwriting, engraved next to him. In 2006, he faces forward, in an engraving based on a portrait done by Rembrandt Peale in 1800, right before Jefferson became President. The 2006 nickel is the first circulating U.S. coin that does not show a president in profile.

For more information on currency and related topics, try the links on the next page.

5 Successful Counterfeiters
How Bail Works
Why do Shriners drive those little cars?