by Sarah Gleim Aug 8, 2019
The symbols noted on the front and back of the dollar bill here are all explained in the accompanying article. Compare as you read along. © HowStuffWorks

No doubt you're familiar with the U.S. $1 bill. You've likely seen it thousands and thousands of times, and it's probably one of the most recognizable pieces of currency in the world. You may even have a few in your wallet right now.

But how often have you really looked it over and wondered what's behind its design and symbols?

Well for one, they weren't chosen by chance. Like that portrait of George Washington. It hasn't always been on the dollar. The very first legal $1 tender was issued by the United States during the Civil War, and it featured a portrait of then-secretary of the treasury, Salmon P. Chase. Washington didn't get that honor until 1869.

Now what about all those other symbols?

The Front of the Dollar

The note position letter and number is a combination of one letter and one number (on this bill it's B3) and simply denotes what position on the plate the bill was printed. The front of the $1 bill also includes its note position and plate serial number (B95). It identifies the actual engraving plate and its position on that plate. They appear on both the front and back of the dollar because different plates are used to print each side.

That last number you see on the front of the $1 bill is the bill series. It's between the portrait of Washington and the signature of the current treasury secretary. It's a year (on this bill it's 2009) but it doesn't actually indicate when the bill was printed. Instead it identifies the year when the design of this particular bill was implemented. New designs are issued when things change, like when a new secretary of the treasury takes office.

Finally, the U.S. Treasury Seal is depicted on the front of the $1 bill. The seal has remained relatively unchanged since 1789, and has arms depicting balance scales, a key and a chevron with 13 stars. The original seal, which was similar to the current design approved in 1968, was designed by Francis Hopkinson, a delegate to the Continental Congress.

The Reverse of the Dollar

The symbols on the flip side of the dollar hold a lot of meaning. They include both sides of The Great Seal of the U.S., as well as the bill's plate serial number.

This extreme closeup shows the obverse of the Great Seal of the United States of America as featured on the $1 bill. The Founding Fathers took extreme care in choosing its symbolism.
zlisjak/Getty Images

Now onto the Great Seal. The seal dates back to the country's Founding Fathers. Before they adjourned the Continental Congress on July 4, 1776, they formed a committee — it included John Adams, Thomas Jefferson and Benjamin Franklin — to design a seal that would be symbolic of the new country's ideals. It wasn't until five years later, though, that the final design was approved by Congress. The seal's design is credited to Charles Thomson, who was a leading merchant in Philadelphia and secretary of the Continental Congress at the time.

Thomson's design includes lots of symbolism he and the Founding Fathers intended. The obverse, for instance, features an American eagle with a shield on its breast as the central figure. In the eagle's right talon is an olive branch, and in the left talon are bundles of arrows. In its beak the eagle is clutching a white scroll inscribed "E Pluribus Unum" (Latin for "Out of many, one"). Above the eagle is a crest that includes a constellation of 13 stars.

Thomson explained to Congress that the shield's blue horizontal band represents Congress, and its 13 red and white vertical stripes signify the 13 original colonies. The 13 stars above the eagle "denote a new state taking its place and rank among other sovereign powers." The olive branches and arrows, he said, "denote the power of peace and war, which is exclusively vested in Congress." Finally, he said, the motto, "E Pluribus Unum" alludes to the entire union as a whole.

This extreme closeup shows the reverse of the Great Seal as featured on the $1 bill.
Rouzes/Getty Images

The reverse of the seal features an unfinished pyramid, which is made of 13 rows of building blocks; on the first row are the Roman numerals representing 1776. At the top of the pyramid is an eye and rays that radiate outward. Above the pyramid is the inscription "Annuit Coeptis" (Latin for "Providence Has Favored Our Undertakings"); below the pyramid it says "Novus Ordo Seclorum" (Latin for "A New Order of the Ages").

Thomson told Congress he chose a pyramid to symbolize strength and longevity, and the the eye and motto above to "allude to the many signal interpositions of providence in favour [sic] of the American cause." Thomson wrote the motto beneath the pyramid — "Novus Ordo Seclorum" — and the Roman numerals for 1776 as a way to honor the country's beginnings from that date.

Got all that? Good thing because the U.S. government has no plans of ever changing it. In fact, there's a law in place that prohibits the redesign of $1 bill. And we're glad because we have no intention of ever writing this article again.

Here's How Plant and Animal Cells Are Different

Hamsters Aren't Jerks. Here's How to Stop Them From Biting 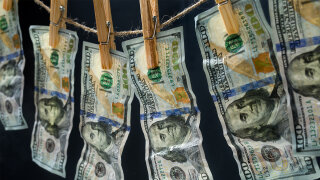 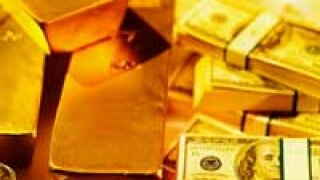 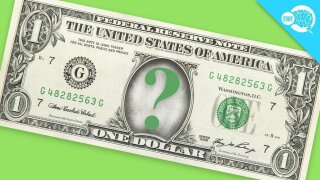 The Two Basic Steps to Put Your Own Face on U.S. Money