by Ed Grabianowski
Prev NEXT
5

The Recovery of Retail Sales 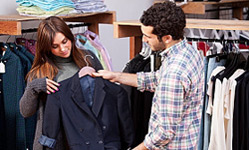 Eventually, economic downturns make their way to the average spender. Consumer confidence falls as people save more and spend less in fear of even worse times to come. Reduced consumer spending hurts retailers, which hurts retail employees, who represent another big chunk of the economy. So an increase in retail sales is a good sign that the recovery is affecting all levels of the economy.