10 Ways to Finance a New Business 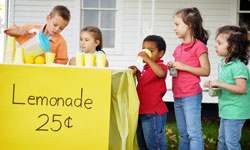 When you were eight years old, you launched a highly profitable lemonade stand in your front yard. With nothing but a packet of instant drink mix, a crudely drawn sign and a winning smile, you grossed a whopping $2.35 in just an hour and 15 minutes. If only all new businesses were that easy.

According to the Global Entrepreneurship Monitor, a research group, the average cost of starting a new business in the United States in 2005 was $70,000 [source: Consumer Reports]. In a 2004 survey of failed businesses, 79 percent of respondents said that "starting out with too little money" was a major cause of their collapse [source: Sugars].

But how do you finance a new business? When you were eight, you could borrow the drink mix from mom. But now that you're grown up, will she let you borrow her life savings?

Luckily, you're not the first entrepreneur to start with nothing but a good idea. Keep reading to learn about 10 effective and creative ways to raise start-up capital for your new business.