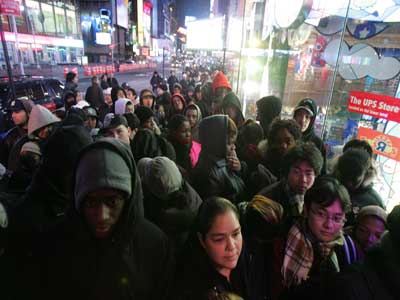 Shoppers line up outside of Toys "R" Us in Times Square on Black Friday morning. See pictures of popular toys.
Hiroko Masuike/Getty Images

For scores of Americans, as soon as they digest their Thanksgiving turkey, it's time to think about holiday shopping. They snatch up newspapers bursting at the seams with circulars and advertisements heralding Black Friday sales. Coined in the 1960s, "Black Friday" refers to the day after Thanksgiving that marks the traditional kickoff to the holiday shopping season [source: Tanenbaum and Tate]. The "black" in Black Friday symbolizes stores turning a profit.

These days, some stores don't even wait for Friday morning. They open their doors Thanksgiving evening or at midnight to give deal-hungry shoppers an early start for the shelves. But not everyone is eager to whip out their wallets while the scent of pumpkin pie still lingers in the air.

You can divide holiday shoppers into two distinct camps: the Black Friday go-getters and the procrastinators. Braving a retail mall the day after Thanksgiving usually involves driving in circles around a parking lot to find a space, elbowing your way down aisles and enduring endless checkout lines. All the while, the nonstop tune of "Jingle Bells" -- the most frequently played holiday song in shopping malls -- goes jingling all the way into every crevice of your brain. Black Friday enthusiasts say it's worth the hassle, though, since many stores will strip down prices to move merchandise. For that reason, you often hear Black Friday proclaimed as the busiest shopping day of the year.

­But what about the shoppers who oversleep Black Friday door busters due to too much nap-inducing tryptophan in Thanksgiving turkey? Do they hit the stores in a panicky pre-Christmas mob that's large enough to contend with Black Friday for business? After all, even the most ardent holiday customers who finish a bulk of their buying before Halloween forget a name on their lengthy lists and have to make last-minute purchases.

­Y­ou can always expect to deal with jam-packed stores, long lines and frenzied shoppers in search of Black Friday deals. And as far as the number of bodies that walk in and out of stores, Black Friday hauls them in. That heavy Black Friday foot traffic translates to high dollar profits, accounting for 4.5 to 5 percent of all holiday sales [source: Credeur and Riddell]. In 2014, the average shopper spent about $381 over Thanksgiving weekend; total retail spending was about $51 billion.

That's an undeniably large number. But it isn't the largest of the season. In fact, Black Friday isn't the busiest shopping day of the year normally, despite what popular opinion holds [source: National Retail Federation]. Instead, the holiday shopping procrastinators win out: The highest sales day of the year usually strikes the Saturday before Christmas [source: International Council of Shopping Centers].

How is that possible if shoppers line up in front of stores at the crack of dawn on Black Friday? Customer volume goes through the roof, but sales don't follow in suit. Surveys have shown that despite the steady streams of people flowing into stores on Black Friday, not all of them drive home with trunks full of holiday presents. For instance, one study conducted by researchers at Indiana University found a consistently low rate of purchase among Black Friday shoppers [source: Krafft and Mantrala].

A higher percentage of those shoppers bought items the following day. Internet shopping and early previews of Black Friday sales leaked online may also trim the amount of transactions that day as people have more options for tracking down the best bang for their holiday buck.

If lining up at 4 a.m. on the Friday after Thanksgiving isn't your style, you certainly aren't alone. But if you think that waiting until a couple days before Christmas to do your shopping will help you avoid the swarming masses, think again.

In 2005, online retailers desinated the Monday after Thanksgiving to be Cyber Monday. The Web merchants figured that this day would see a substantial sales bump since a majority of online shoppers make their purchases at work. With the boom in online sales generally, the distinctions are breaking down as people shop online every day of the Thanksgiving weekend (as well as visit retail stores).