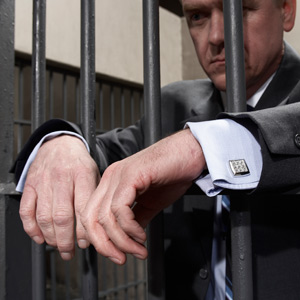 How long do white collar criminals deserve to stay behind bars? Although many believe we should deliberately make sure they get sentences commensurate with other kinds of criminals, others believe we are overcompensating.
Darrin Klimek/Digital Vision/Getty Images

­One ­of the universal econo­mic dilemmas is how to squelch white-collar crime without discouraging healthy business growth that benefits the consumer.

To combat white-collar crime, the U.S. Congress passed a wave of laws and statutes in the 1970s and 80s. The Racketeer Influence and Corrupt Organizations Act (RICO) was originally associated with mafia-related organized crime, but was soon applied to white-collar crime. Under the law, racketeering included things like embezzlement from union funds, bribery and mail fraud. RICO made it easier to prosecute corrupt organizations and seize assets related to corruption. It also allowed states or people to sue perpetrators for treble or three times the dollar amount of damages. It was under this act that junk bond financier Michael Milken was found guilty of various kinds of fraud and bond market manipulation.

When Enron and similar scandals broke out in the early 2000s, Congress took action. It passed the Sarbanes-Oxley Act (SOX) in 2002 to improve corporate governance -- the relationship and accountability between corporations and their stakeholders.

Because other cultures can have dramatically different social mores, international business deals can put executives in awkward positions. In certain societies like some in Western Africa, it was customary that businessmen or even government officials work on tips -- an important and legal source of income. This is referred to as the dash system, where a dash is a tip. As a result, in order to conduct business, Westerners were expected to offer what amount to bribes under Western laws [source: Salinger]. In Russia and other countries, bribes are sometimes required in order to land a contract -- which can make conducting squeaky-clean business impossible [source: Myers]. It's estimated that truck drivers in India pay nearly $5 billion a year in under-the-table money to keep their rigs on the roads [source: Wharton School].

As international business becomes easier and more common due to the development of communication technology, these disparities in what's considered corruption are both more apparent and more important. Rampant corruption has made it difficult for Western companies to conduct business in some places. To unify the business ethics of the world, a group known as Transparency International attempts to measure the relative corruption among different countries and make it known to the public. It has called on particular countries to shape up [source: AP]. The group believes increased public awareness and the more that businesses establish and adhere to a code of conduct, the more pressure will be on governments and corporations to put up restrictions and institute bribery refusal policies.