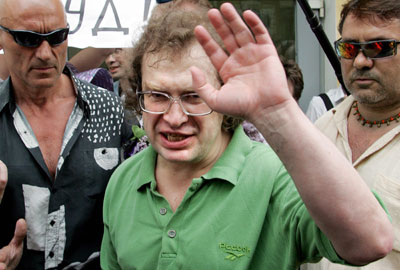 You're outside cutting the lawn and your neighbor pulls up in a brand-new BMW. He's wearing a suit and carrying a briefcase. You've never seen this guy out of his sweatpants. Maybe a millionaire uncle died?

After some small talk, you ask him what's up with the new car and the new suit. He acts all coy and says he just got lucky with a new type of business opportunity. You're curious, so you ask for more details.

He says he's become a freelance distributor for a health supplement company. Turns out that there are tons of people out there who will pay big bucks for his products. And even better, the more salesmen he hires to work for him, the more money he makes. For a one-time sign-up fee, plus the cost of the merchandise, you could start doing the same thing tomorrow. "Hire 10 salesmen," he says, "And you'll have your own BMW in a month."

Wow, you think, this is the real deal. No more office work, no more bosses, just managing a team of salesmen from home. You go for it. You hand your neighbor a check, collect your starter kit of supplements and start hitting the phones looking for potential salesmen.

You call your buddy Bob to see if he's interested. But the weird thing is, Bob ran into your same neighbor yesterday at the grocery store and also signed up to be a distributor. What's worse, Bob's already been calling around, and it looks like your neighbor and his buddies have already signed up half the city.

"Nobody's going to want to buy from us because we're all trying to sell!" cries Bob. "And we'll never make our money back on salespeople because there's no one left to recruit!"

Looks like you've been suckered in by a pyramid scheme. Your neighbor and his buddies are at the top of the pyramid. They got in early and made money by recruiting people like you. But now you're competing with hundreds of other distributors for the same small pool of potential recruits. The odds of making your money back are worse than roulette in Vegas [source: Taylor].

So who makes money and who loses it in a pyramid scheme? And what are some signs that a fabulous "business opportunity" is really a pyramid in disguise? Read on to find out.