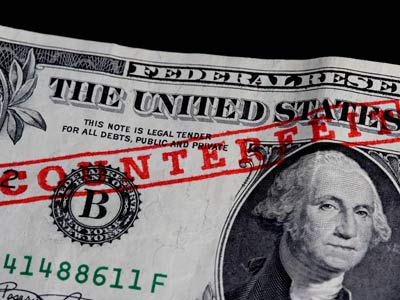 Counterfeiting has come to be known as one type of white collar crime.
­Martin Diebel/fStop/Getty Images

White-collar crime encompasses a whole slew of offenses that might seem ver­y different, but certain characteristics unite them under this same umbrella. They all have to do with deceit, don't use violence and usually come about because the perpetrator had been given the opportunity by virtue of his occupation. Here are less traditional examples of white-collar crime.

Environmental law violations are forms of white-collar crime. In the course of doing business, corporations sometimes take actions -- like dumping toxic waste -- that harm environmental conditions for local residents or wildlife. Businesses and executives, however, might do it anyway and cover it up to avoid paying the costs of obeying safe environmental practices.

What's more, economic espionage and trade secret theft are white-collar crimes as well. You can't just go about stealing important plans, ideas and designs from other people and corporations for financial benefit -- these can count as trade secrets. Stealing them for a foreign government in particular will get you in hot water with government agencies like the FBI.

When a company or person's finances get so bad off that paying debts becomes impossible, bankruptcy, which entails at least a partial forgiveness of debt, can be a savior from disaster. Unfortunately, some choose to abuse this option by making their financial position look worse than it is in order to get out of debt. This is considered bankruptcy fraud.

Insurance fraud entails lying to obtain an insurance payout. Credit card fraud refers to stealing another's credit card information to make purchases. In a telemarketing fraud, the perpetrator poses as a telemarketer in order to obtain personal information for identity theft or scheme others into sending money.

Computer or Internet fraud occurs when someone intercepts a transmission or hacks into a computer to obtain personal information or credit card numbers. In a scheme known as phishing, fraudsters send e-mails that appear to be from legitimate businesses with whom you do business and try to get you to click on a hyperlink to enter your personal identification number (PIN) or other personal information so that they can empty your bank account.

Mail fraud is similar to telemarketing fraud, except it uses mail rather than the phone to con the recipient into sending money or providing personal information.

­Counterfeiting is another type of white-collar crime. A counterfeiter makes a fake item, such as imitation paper money or even a brand-name product, and tries to pass it off as the real thing for profit. A related crime would be to secretly use shoddy materials for construction to cut costs, which results in unsafe structures.

Other illegal acts, such as obstruction of justice and perjury are also frequently associated with this kind of crime. Some may also consider a corporation's lack of health and safety conditions a white-collar crime, or instances such as when a pharmaceutical company lies about the safety of a drug by skewing the results of lab tests in order to get the product on the market.

­If you've never thought of some of the above examples as white-collar crime, that's understandable. People have different ideas of what white-collar crime is. It's difficult to even assemble a complete list of all the examples under the broadest theories. Scholars have argued about the meaning and scope of the concept since its inception. Before we can understand the concept and the theories surrounding it, we'll need to get some background on the history of the crime itself. Next, find out what the first white-collar crime recorded was.