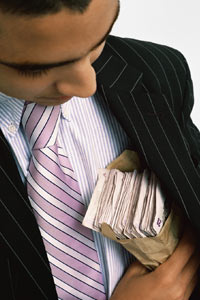 Taking bribes is an example of white collar crime in Western societies, but some cultures have vastly different attitudes toward it.­
Image Source/Getty Images

White-collar crime is known for being complicated -- it thrives on that very quality. It can be difficult to even keep up with the jargon of financial terms and violations associated with this type of crime. As a result, unwitting perpetrators sometimes commit these kinds of crimes because they fail to understand the legal terms of their contracts or ethical consequences of their actions. The following list can help you familiarize yourself with the terms and concepts.

Insider trading refers to buying or selling a company's stock while in the know or in possession of material non-public information. If an employee so much as tells his or her friend some important company information and the friend trades that corporation's stock, both buddies could be indicted.

Securities fraud involves some sort of deceit, underhandedness or misrepresentation of a company's performance that manipulates the market and can result in people making bad investments. An accountant would be guilty of this if he or she cooks the books to make it look like a company is bringing in more profit than it is. Insider trading can also fall within this category.

Antitrust violations occur when a company dominates an important market to such an extent that it can work above the competitive free market at severe disadvantage to the consumer, it's considered a monopoly or trust. Actions to abuse this power like price fixing -- artificially raising prices beyond competitive market values -- count as antitrust violations.

Bribery is one of the most well-known types of white-collar crime. It involves a quid pro quo relationship where someone gives a gift to a powerful person in exchange for a favorable decision or use of power. For example, an influential person could agree to accept a kickback or money in exchange for recommending a company's bid for a contract. This practice is unethical when it comes to decisions that should be made on an objective basis because it can result in negative effects for the public, particularly in the cases of public officials.

If a company entrusts an accountant with taking care of finances and the accountant decides to secretly funnel away some funds for himself, the accountant is guilty of a sophisticated kind of theft called embezzlement. Also dubbed "skimming some off the top," it involves a person secretly running away with the funds entrusted to him, often by cleverly hiding the funds in a process known as money laundering.

Taxes are as certain as death and usually just as welcome. Both companies and people have tried to knowingly duck paying taxes, called "tax evasion," by misrepresenting profits or income.

It can be easy for someone who doesn't know the rules to accidentally commit a white-collar crime like insider trading. Discrepancies also occur across cultures. For instance, some countries might not even have the same rules or cultural stigma attached to bribery that Western societies have -- we'll explain this more later.

As we mentioned on the last page, it can also be difficult to visualize the victim while performing some of these crimes. As an example, imagine that you're an accountant for a successful public company that you own stock in. While you are gathering information, you discover that it suffered massive third-quarter losses that will surely devalue your stock. The news won't be released for another few weeks, however, and you suddenly find yourself in possession of worthless stock -- unless, of course, you choose to unload it before the news gets out. It's difficult, at this point, to consider the poor sucker who will buy the stock from you.

Although the above are some of the more traditional examples of white-collar crime, next we'll talk about some other kinds.