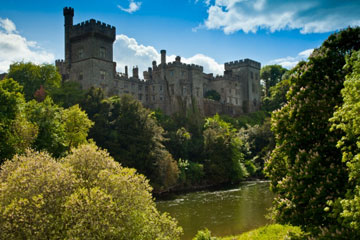 If you're in line to inherit this, get prepared to write out a big check to the government before you claim the deed. See more home design pictures.
Tim Graham/Getty Images

Benjamin Franklin once wrote, "In this world nothing can be said to be certain, except death and taxes." It's an old, sardonic aphorism that nevertheless is universally true. One delightful area of tax law manages to combine both death and taxes into a single experience: inheritance tax.

In fact, what happens to your money when you die seems to be the source of quite a few old saws: "They get you coming and going," and "You can't take it with you," among others. What it all boils down to is pretty straightforward: When you die, you leave your money, your home, your possessions and other things of material value behind. You'll pass them down to your children, to other family members or friends, or to charity. And one way or another, the government will take its share.

In practice, of course, nothing is as simple as that. The property of the deceased might be subject to inheritance tax, estate tax, state and federal tax statutes, and a host of exemptions that can put more money in the pockets of the heirs. Because inheritance and estate taxes (sometimes known as "death taxes") are generally seen as a tax on the rich, these tax laws also get batted around as political footballs from time to time. In fact, President Obama signed a law changing federal estate taxes in 2010, and there are likely more changes to come.

If you're interested in planning ahead for that inevitable day when you or a loved one passes away, you've come to the right place. In this article, we'll explain the difference between inheritance and estate tax, how to avoid as much of those taxes as legally possible, and what the actual rates are for those taxes.

Before we start, let's clear up some confusion about terminology. While "estate tax" and "inheritance tax" are distinct terms with separate legal meanings, those meanings differ from country to country. Sometimes, the terms are used interchangeably. You might also hear a pundit of commentator on TV talking about a "death tax." That term can refer to either estate or inheritance tax, depending on the situation. The definitions in this article are generally accurate in the U.S. and in international law, although even some U.S. states muddle the terms.

Let's start with estate tax. Your estate is the total of your possessions and debts left behind when you die. An executor, either named in the will or appointed by law, is placed in charge of the estate and must pay off outstanding debts, liquidating property to do so if necessary. Funeral expenses and administrative costs (that is, payment to the executor for dealing with all of this) are taken out next. Whatever is left over is what can be passed on, but before that happens, the federal government takes its share. In 2010, the maximum rate was 35 percent; a few states levy an estate tax as well. So, the estate tax is a tax on the total amount of the estate, after creditors are paid but before any heirs get their bequest. The tax is paid by the estate itself.

Inheritance tax occurs after the heirs have received their payouts from rich Uncle Thaddeus. It is a tax on the amount received and is paid by the heir. Inheritance taxes are levied by the states. This means that in many cases an estate is taxed twice -- first by the federal estate tax, then by the state inheritance tax.

What exactly counts toward the estate, anyway? Is it just the money stashed under the bed? The bank account? The summer home in the Maldives? An estate is all of those things, and more: Cash, accounts, real estate, stocks and bonds and other business interests, and valuable goods like cars, boats, art pieces or rare collections. An appraiser will determine the fair market value of everything to figure out the taxable value of the estate.

So far, for anyone who dies and wants to leave anything of value to his or her heirs, things look pretty grim. There's a bright spot, though -- exemptions that reduce the taxable amount. We'll discuss that next. 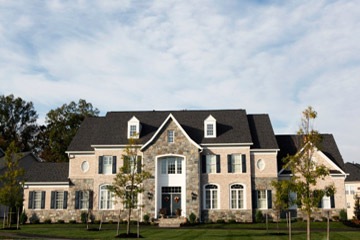 If you're the spouse of the unfortunately deceased owner of this home, you're in for a bit of a shock.
Tim Kitchen/Getty Images

There are quite a few ways to avoid or reduce inheritance and estate taxes. Some of them involve very complicated financial structures and maneuvers. If you're the type of person who has tens or hundreds of millions of dollars of estate value to worry about, you're going to hire a skilled estate planner to deal with these things. Basically, an estate planner will work with the family and utilize trusts, charitable donations, non-taxable gifts and other techniques to meet the family's needs and minimize the tax burden.

For smaller estates, exemptions fall into two main categories: exemptions due to the heir's relationship with the deceased and amount-based exemptions. In either case, the exemptions are applied to the taxable amount before the government's percentage comes out. That means that an estate tax can use each exemption just once (because it's only taxed once), while exemptions to inheritance taxes are applied separately to each heir, and can differ from heir to heir.

The most common relationship-based exemption is when the estate is passed from the deceased person to a spouse. In that case, there is an unlimited exemption -- no matter the value of the estate, it will not be subject to federal estate tax if it's passed to a spouse. States who levy an estate tax follow the federal government's rules for this as well. If the estate is passed to children, siblings or golfing buddies, the exemption doesn't apply.

Amount-based exemptions are where things get sticky. For federal estate taxes, the current limit (as of 2011) is $5 million for an individual, $10 million for a couple. If the estate is worth that much or less, no estate tax is levied. This is why estate planners work so hard to move money around -- if they shrink it down to $5 million or less, the estate is tax free. This is also why estate taxes are considered a tax on the rich, because really, how many of us are losing sleep over what happens to someone's $20 million estate?

State inheritance taxes make things more complicated. Each state uses different thresholds (if it has inheritance taxes at all). There might be exemptions for some family members, but not others, or different tax rates depending on whether you're a spouse, a child or just a friend. Many states tie their inheritance tax directly to the federal estate tax and exemption rate. Some have much lower thresholds than the federal threshold. In Illinois, for example, the threshold is only $2 million, while in Hawaii it's $3.5 million (as of 2011) [source: McGuireWoods].

There are a few other miscellaneous deductions, usually deducted from the estate's value before taxation. If a property is mortgaged, the amount of the mortgage is deductable. Also, family business and farms may be taxed at a reduced rate. This allows families to pass business down to the children without the business going bankrupt.

Exact inheritance tax rates vary from state to state, but inheritance taxes tend to be set up on a progressive scale. The general rule: The more valuable the estate, the higher the tax rate.

How do you know what your inheritance tax rate will be? The tax bracket for your inheritance depends on your relationship to the deceased. Remember, surviving spouses are completely exempt from inheritance tax. Also, keep in mind that state tax laws do change, so the specific numbers in the following examples may shift over the years.

For another example, let's take a look at Indiana's inheritance tax system. Indiana divides heirs into three classes. Each class has a different tax rate schedule and exemption.

Let's imagine a fictional family -- Mr. Smith is a widower with two children, Belinda and Timothy. Mr. Smith's children would be Class A heirs. Let's say they each inherit $450,000 in cash. Because they are Class A heirs, each can claim a $100,000 exemption, reducing their taxable inheritance to $350,000 apiece. Now, let's see what their tax rate will be.

Belinda and Timothy are in the fifth marginal tax rate for the Indiana inheritance tax. This means that their first $25,000 will be taxed at 1 percent; their second $25,000 ($25,001 to $50,000) will be taxed at 2 percent; and so on. When their income reaches the fifth bracket, they have a remaining $49,999 that will be taxed at the 5 percent rate. The calculation will look like this:

To find their total tax, add the tax from the fifth bracket to the tax accumulated in the lower tax brackets.

Federal estate tax law has undergone some big changes in recent years. In 2010, there was no federal estate tax. However, inheritances were taxed as capital gains, the same as profits from stocks, bonds and real estate. But at the end of 2010, President Obama signed the December 2010 Tax Relief Act. It re-established the federal estate tax at a rate of 35 percent, but with the $5 million exemption. That exemption, by the way, means that only 0.5 percent of all estates in the U.S. will pay any estate taxes at all [source: Randolph]. Those tax rates and exemption thresholds expire at the end of 2012, when Congress will decide on a new rate.

To learn more about inheritance tax and related topics, you can follow the links on the next page.