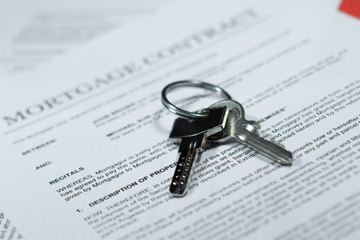 Asking someone to co-sign a mortgage with you is no simple favor. You're entering into a long, legally binding agreement.
©2009 Jupiterimages Corporation

Imagine this: You get a modest windfall of cash, and it's just enough for a down payment on the starter home you've always wanted. What's more, the current real estate market is a buyer's dream, with houses going for pennies on the dollar in some cases. With great excitement, you call up your friendly neighborhood mortgage broker and tell him the great news -- you're ready to buy a place of your own. He asks you a few questions, and within minutes, you're feeling completely deflated. It seems that with your financial history, the only way you'll qualify for a mortgage is to get a co-signer.

Can't identify with that scenario? How about this one: You get a phone call from a good friend, and he asks you to co-sign a loan to help him buy a house. You may have heard the term "co-signing," and you may have even done it already at some point in your life, like when you and your roommates rented an apartment. Mortgage co-signing is when you and another person jointly apply for and carry a primary or even a second mortgage. Going in together on a house may seem simple, but typically, it's rather complicated. It involves entering into a long-term, legally binding agreement with the co-borrower, the bank and other entities, like the local government where the property is located.

Some people advise never co-signing a mortgage for a number of reasons, which we'll explore in this article. Yet, others stand behind the notion of co-signing because it provides additional options in buying or refinancing a residential property. The most important thing to keep in mind if you're considering being or getting a co-signer is this: Know what you're getting into.

We'll explore the ins and outs of mortgage co-signing in the next pages.

Getting a Mortgage Co-signer

Essentially, a co-signer is someone who backs up your promise to make payments on a property. Many people need a co-signer in order to get a mortgage. You'll want to find a co-signer who's not only willing but also able to meet the bank's financial criteria. He or she must be the age of majority; in the United States, that's 18. The bank will look at factors that influence the co-signer's ability to pay, such as his or her income, other debts and assets, credit history and credit score. When evaluating the co-signer's creditworthiness, your lender may also factor in the debt of the new mortgage as well as housing costs like taxes, homeowner's insurance and maintenance fees -- even if the agreement between you and the co-signer is that he or she won't be living in the property or paying the mortgage.

Obviously, if you're married, your spouse will likely co-sign on the dotted line to purchase your dream home or investment property. If you're single, it makes sense that a parent, family member or domestic partner be potential co-signers. You want someone you trust and who trusts you. It helps to establish this trust in writing. Draw up an enforceable contract between you and the co-signer, specifying rights and responsibilities, such as who will be occupying and maintaining the property and who will be paying the bills.

As we learned earlier, co-signing a mortgage can get rather hairy. Experts strongly recommend that co-signers consult with their own title company and an attorney and have all documents reviewed before, during and after putting their names on papers to purchase a property. 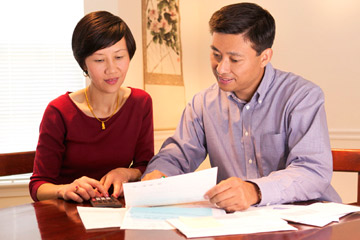 No matter if you're co-signing for a partner, family member or friend, understand the consequences of your decision. Putting your name on a mortgage means you're legally responsible for that property and the taxes and maintenance fees that come with it.
©2009 Jupiterimages Corporation

Once you agree to co-sign a mortgage, you'll go through nearly the same process as if you were applying for the home loan yourself. If you're buying real estate in the United States, there's a good chance this process begins by pre-qualifying for a mortgage, which is like filing an initial application for a mortgage. The result of pre-qualifying is that you'll learn how much money a bank will lend you to shop for and buy a house.

Whether you're the one buying a house or the one co-signing for someone else, once there's a contract on the home, you and the co-signer will complete an official application form for the mortgage, sign it and give it to the mortgage broker or loan officer, along with other documents, like authorization to verify your employment, income and credit history. But the process is far from over at this point. That bank representative will ask you a slew of questions, and he or she may contact you a number of times with questions up until the property purchase or settlement date. Lenders will do their due diligence and continuously verify your income, debts, assets and other factors that will impact your ability to pay the mortgage until the very hour you close the deal on the property. Even throughout the life of the loan, the mortgage company may do a credit check from time to time to ensure you can continue to make payments on the mortgage.

Starting the day you and your friend, family member or partner purchase the property, you're legally responsible for property taxes as long as your name is on the deed or title. You're also obligated to the bank to maintain homeowner's insurance until the conditions of the loan are satisfied. So, it's important to keep a copy of the contract you and your co-signer drew up in a safe place, should the need arise to refer to it.

Pros and Cons of Co-signing a Mortgage

As we discovered earlier, there are mixed opinions on the concept of mortgage co-signing. Although there are advantages -- mostly to the primary borrower -- of co-signing, things can go wrong and create more than an inconvenience for either or both people. Weighing the pros and cons of co-signing before you ever put your signature on that first mortgage document will help you make the best decision for your lifestyle and financial future.

There are a number of scenarios where a person would need or want a co-signer. Understandably, a married couple would typically co-sign for a mortgage. But there are other situations where a borrower must seek a co-signer. He or she may have weak credit, a high debt-to-income (DTI) ratio or an unstable job history. For example, a primary borrower may have been divorced for a number of years, but his name is still on the mortgage of the house in which his ex-wife lives. Or, it may be someone who filed bankruptcy several years ago due to a financial catastrophe and is now getting back on his feet. A bank might require a primary borrower to have a second borrower who's able and committed to guaranteeing the loan will be repaid. There are also some personal motives a person may have for wanting to back up another person's promise to pay a mortgage -- and most of them have to do with helping a friend or family member.

However, there are reasons to be cautious about co-signing a mortgage, even if you're trying to lend a hand to a sibling or a pal. Even the best-laid plans can go wrong and wreak havoc on one or both borrowers. Suppose the primary borrower makes all the mortgage, tax and insurance payments, as well as pays all maintenance costs for years. Then, all of a sudden, the co-signer pops up and wants to kick the borrower out of the place, demands 50 percent of the value of the home, or unbeknownst to the primary borrower, uses the property as collateral for another loan. These are worst-case scenarios for the primary borrower. Usually, those opposing the idea of co-signing advise people against doing so because of what can go wrong for the co-signer. For example, if the primary borrower fails to make payments or makes them late, it goes against the secondary borrower's credit history as well. In addition, the mortgage will be factored into the secondary borrower's DTI ratio and may prevent him or her from buying other property or getting other loans.

It's not easy for either party to get out of a co-signed mortgage. They have to sell the property and pay it off, or one could refinance the mortgage without the co-signer. Perhaps the least preferred way of getting out of the mortgage is if one or both of them dies, in which case their estates are responsible for it.

As you can see, co-signing is a more complicated version of getting a mortgage; more parties are involved in the loan agreement and with the care and maintenance of the property. Anyone considering mortgage co-signing should consult with both an attorney and a title company to get a complete understanding of the rights, responsibilities and potential pitfalls of being a co-signer.