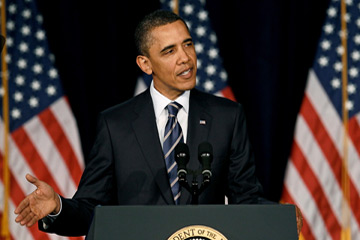 On April 13, 2011, President Barack Obama proposed a "comprehensive, balanced deficit reduction framework" designed to rein in U.S. government spending, reduce the country's debt and strengthen its battered fiscal reputation. The proposal came amid myriad financial concerns, such as a $1.5 trillion budget deficit, heated debates about raising the U.S. debt ceiling and a Standard and Poor's warning about the U.S. credit rating -- not to mention the lingering effects of a recession.

The plan, known as The President's Framework for Shared Responsibility and Shared Fiscal Responsibility, seeks to ultimately reduce the federal deficit by $4 trillion dollars within 12 years. Under this plan, the nation's debt would represent 2.5 percent of its gross national product (GDP) -- the market value of all the goods and services a country produces -- by 2015, heading toward 2 percent by 2020. (The deficit as of April 2011 stood at about 11 percent of GDP, or a projected $1.5 trillion.)

To make sure that the nation's debt stays manageable under this plan, President Obama asked Congress to implement a "debt failsafe" by 2014 that will trigger reductions throughout the federal budget until the debt represents no more than 2.8 percent of GDP. Like similar measures enacted by past presidents, the trigger will not apply to entitlement programs like Social Security, Medicare or programs designed to help the poor. The plan doesn't just employ cutting costs to reduce the deficit; it also proposes a mix of tax reforms and interest savings. In fact, for every dollar in tax reform that helps cut the deficit, Obama's framework has three dollars in spending cuts and interest savings [source: White House].

This may seem like a bunch of math -- and it is -- but the framework is grounded in several common-sense principles. In addition to the general debt reduction plan, it calls for "shared sacrifice" from every American citizen, including the wealthy. Congress itself will get involved as well: Obama announced plans to ask Senate Majority Leader Harry Reid (D-NV), Speaker of the House John Boehner (R-OH), House Minority Leader Nancy Pelosi (D-CA) and Senate Minority Leader Mitch McConnell (R-KY) each to select four members from their ranks to participate in bipartisan and bicameral talks, led by Vice President Joe Biden, to build a legislative framework to reduce the deficit [source: White House].

All right, enough about the goal. How can the United States get there? Find out on the next page.

The plan President Barack Obama's announced in April 2011 focuses on reducing debt in four key areas: discretionary spending, health care, security spending and other mandatory spending. While Obama stressed that he will not accept cuts that will compromise national security, he will consider Defense Secretary Robert Gates' assertion that the government could save $400 billion by 2023 just by cutting the fat in the Defense budget [source: White House]. As for other discretionary spending, the President aims to continue to build on the $400 billion he cut from his most recent budget, and cut non-security spending that should generate an additional $200 billion in savings over the next decade.

Health care is a major obstacle to deficit reduction. Here, President Obama has sought to fix runaway Medicare and Medicaid costs by reforming both programs by "reducing waste, increasing accountability, promoting efficiency and improving the quality of care." These reforms will save the federal government $340 billion over the 10 years and $480 billion by 2023. Obama's framework also plans to strengthen key reforms to both programs that were enacted under the Affordable Care Act, such as the Independent Payment Advisory Board (IPAB). This board would analyze and find ways to reduce Medicare costs if and when they get out of control. The President also plans cuts in unnecessary drug spending and improvements to patient safety standards that would save at both programs at least $50 million over the next 10 years [source: White House].

President Obama also made mandatory spending cuts beyond health care. Measures to reform agricultural subsidy programs, fix the federal pension system and the federal unemployment trust, and reduce fraud should save the federal government about $360 billion by 2023. The President also reinforced his commitment to protecting Social Security, rejecting Bush-era tax cuts for the wealthy, and instead calling on Congress to enact comprehensive tax reform that "produces a system that is fairer, has fewer loopholes, less complexity and is not rigged in favor of those who can afford lawyers and accountants to game it" [source: White House].

All in all, everything you need to know about the President's framework is right in its title: The plan "ensures that shared prosperity will keep the American dream alive for generations to come. A key component of that strategy must be a commitment to responsibility and living within our means." Is our federal government prepared to do just that -- and will the plan really work? Time will tell.

For more information on government spending, see the links on the next page.

5 Successful Counterfeiters
How Bail Works
Why do Shriners drive those little cars?