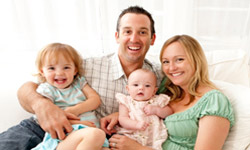 Kids are wonderful -- and they really come in handy during tax time, too!
Marcy Maloy/Getty Images

You don't have to be married to have children, but according to the Census Bureau, married couples make up the vast majority of American households with children. According to 2009 data, although 40 percent of all live births are to unmarried mothers, only 29.5 percent of American households are single-parent households [source: U.S. Census Bureau]. The moral of the stats story is this: You're more likely to have kids if you're married.

And the best part of having kids is that they're tax gold! Every member of your family gets a free personal exemption of $3,900 in 2013, even a newborn infant. Then there's the Child Tax Credit. Deduct another $1,000 for each child, unless you and your spouse make more than $110,000 a year, after which the credit begins to phase out [source: Internal Revenue Service]. If you don't make a lot of money and have three or more kids, you might even qualify for an additional child credit.

For the lowest income earners, the amount of your Earned Income Tax Credit (EITC) increases significantly with each child you have. In 2013, the highest EITC amount ($6,044) is reserved for families with three or more children earning around $13,450 a year [source: Internal Revenue Service].

The next tax benefit of marriage is for folks who are "unlucky" enough to die rich.