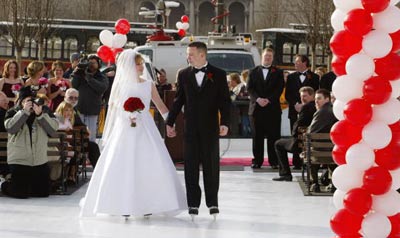 Amanda Hughes and Matthew Self join in holy matrimony on ice in Chicago on Valentine's Day 2002. Although the city picked up the tab, the marriage is still going to cost the couple plenty. See more investing pictures.
Tim Boyle/Getty Images

­T­he thought of marriage generally invokes images of white weddings, little houses with picket fences and driving kids to soccer practice in the family station wagon. But all of these things cost money. Have you ever wondered if marriage is perhaps a bad investment? Or, with tax breaks and the like, could it possibly be a wise investment? Let's look at the costs associated with marriage.

­Since 1990, the average price of a wedding in the United States has nearly doubled. In 2008, the price tag for nuptials reached $28,000 [source: Christian Science Monitor]. This includes everything from the engagement ring to the wedding gown and the honeymoon. But what about all of your new stuff? You're going to need a bigger place to stow all of your wedding presents. A new house sounds good, but they don't come cheap. Even in the midst of a slumping real estate market, the average cost of a new house in the United States in February 2008 was $296,400 [source: U.S. Census].

­­­Y­ou could actually lose potential revenue through marriage, especially when you kick off your life together with a big wedding. Financial author Jeffrey Strain uses the example of a 25-year-old who chooses to invest $35,000 on an IRA that earns 9 percent annual interest rather than spend that money on a wedding. Instead of incurring a loss of revenue (or worse, entering into debt for the wedding), the person would find $1.26 million waiting for him or her on the other side of age 65 [source: The Street].

With all of the costs involved, is it more financially sound to simply stay single? Read about the pros and cons to marriage from an investment standpoint on the next page. 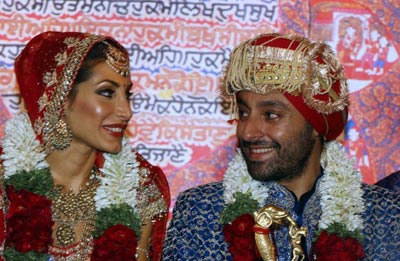 For more information on marriage, investing and related topics, visit the links on the next page.