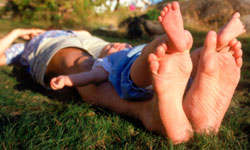 Where's the best place in the world for dads? Not the U.S.A.
Juan Silva/Getty Images

For more than 10 years, the non-profit organization Save the Children has released an annual list of the best places to be a mother, appropriately called the Mothers' Index. Analyzing factors such as gender equity, prenatal and postpartum care, and infant and maternal mortality rates, the Mothers' Index ranks countries around the world according to how well government and social institutions provide for the unique needs of moms and their children [source: Save the Children].

Perhaps surprisingly, the United States typically doesn't perform very well on this list. In 2011, for instance, the nation snagged only the 31st slot. One of the primary reasons Save the Children cited for not giving the U.S. higher placement is the country's nonexistent paid maternity leave policy [source: Save the Children]. That's right: Whereas about 178 countries have instituted national policies guaranteeing paid time off for new mothers, the U.S. is the only industrialized country without one [source: Crary]. In 1993, the U.S. government enacted the Family and Medical Care Leave Act that allows for up to 12 weeks of time off after childbirth, with a couple crucial strings attached [source: Institute for Child and Family Policy]. First, the government-protected maternity leave is unpaid, and secondly, companies with fewer than 50 employees don't have to comply [source: Crary].

That said, at least it's something. Expecting dads employed in the U.S. can anticipate no government support if they'd like to take time off when their sons or daughters arrive. Some companies have instituted paternity leave policies, but the government has remained mum. However, that certainly isn't the standard in many other places around the world -- especially in the following five father-friendly countries.