Defaulting on a Student Loan 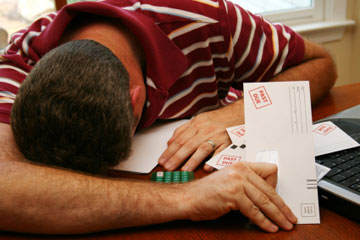 It may be tempting to stop repaying your student loans, but there are alternatives to defaulting.
©iStockphoto/killerb10

Before the U.S. government revised the laws regarding bankruptcy in 1992, it was reasonably easy for a person to default on a student loan. A borrower could simply stop paying and there wasn't much that lenders -- including federal lenders -- could do about it. Because of this, default rates hit their highest point in history, an amazing 22.4 percent (these days the average usually hovers around 6 percent) [source: Kumar]. After 1992, however, it became much more difficult to default. To discharge -- essentially make a loan simply go away -- a student loan, a person had to file bankruptcy. After 2005, when further revisions were made, it became virtually impossible to discharge a student loan. Debtors could look forward to harassing phone calls, years of low credit scores and even garnished wages.

This is why it's never a good idea to default on your student loans. Once you've chosen a repayment type, it's easy to repay a student loan. Each month following the three- or six-month grace period after graduation, you'll receive a bill in the mail. You write a check and mail it off. Even easier, many lenders offer direct withdrawal from your bank account; no check or stamp necessary.

It's simple enough, yet sometimes it's not quite as easy as that. Jobs fall through, layoffs happen, economies tank and bills pile up. While it can be tempting to simply stop mailing in those monthly payments, look into ways your lender may allow you to change the terms of your loan repayment.

Most private lenders and the federal government offer forbearances, periods where repayment of your loan may be suspended without penalty. The interest will continue to accrue, but you may be eligible to get a few months up to a couple years off while you get your finances in order.

If you're swimming in student loans from several sources, you can consolidate them into one monthly payment. The federal government allows loans to be consolidated, but through another, single loan from a commercial lender. The good news is that the loans that you fell behind on and lowered your credit score will be wiped clean. This means your credit should increase favorably with reporting agencies. The bad news is that your new consolidation loan is a private one, meaning you won't have the attractive terms of a federal loan (or loans) any longer.

If you've defaulted on your federal student loans, you can also opt to rehabilitate your accounts. This is simply making payments again. After nine payments made on time over 10 months, you will be considered current once more and the default status will be removed from reports to credit bureaus.

For even more information on student loans and financial aid, visit the next page.