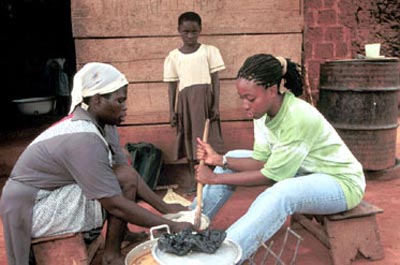 The Peace Corps is a U.S. government program designed to provide foreign aid to developing nations in the form of expertise, education and training. Peace Corps workers are volunteers who not only bring aspects of American culture to the places they work in, they also bring some of that nation's culture back to the United States. The Peace Corps has been in operation for almost 50 years, with more than 7,000 volunteers serving at any given moment.

The Corps is a form of foreign aid, but instead of supplying money to developing nations, the Corps supplies the knowledge and expertise of its citizens. The idea stems from the old proverb, "Give a man a fish, feed him for a day; teach a man to fish, feed him for a lifetime." While building a school or supplying food is certainly crucial for many nations, training their teachers or helping them learn advanced agricultural techniques could have a positive impact that lasts decades.

The Peace Corps is an independent U.S. government agency that operates within the executive branch. The director of the Corps is appointed by the president pending congressional approval. The Corps' budget is part of the federal foreign operations budget (typically about one percent of it), and is also subject to congressional approval. For fiscal year 2006, the total Peace Corps budget was $318.8 million [Source: The Peace Corps].

The current director is Ronald A. Tschetter, the 17th person to hold the position. He was confirmed on Sept. 13, 2006 [Source: The Peace Corps].

Volunteers serve for 27 months. Their living accommodations are provided for the entire time, and they receive a stipend to use as spending money. In addition, volunteers receive $6,000 when they return to the United States to help them transition back into life at home.