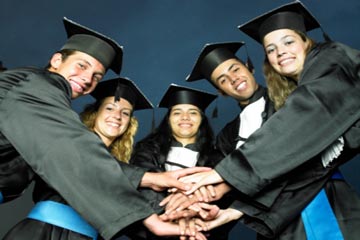 If you're a member of the class of 2010, you're in luck: You may save a little money on your Stafford loans.
Hans Neleman/Getty Images

Low interest rates help make Stafford loans an attractive option for students looking for a way to fund their college educations. Since the federal government secures the loans, financial institutions are willing to lend at a lower interest rate than credit cards or private loans.

There's good news for students who plan to start school between now and 2012. The College Cost Reduction Act of 2007 will drop rates to 4.5 percent for the 2010-11 academic year and to 3.4 percent for 2011-12. The new rates will help students save thousands of dollars over the life of the loan [source: Androitis].

After 2012, the interest rates of subsidized Stafford loans are unknown. They're expected to rise to 6.8 percent for the 2012-2013 academic year, but Congress is currently reviewing an option to switch rates from fixed to variable with a maximum rate of 6.8 percent.

In addition to interest, there's a fee of up to 1.5 percent of the loan that goes to the government or the organization that administers the loans in your state to help reduce the cost of the loans. And if you don't make your loan payments on time, collection costs and late fees may be added to the loan.