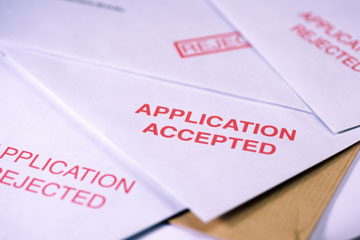 Applying early may secure you a spot, but does it ruin your chances for adequate financial aid?
David Gould/Getty Images

To apply early or to apply regular decision? Many prospective college students wrangle with this question. If you've been wearing your dream school's colors since you were an infant, and you can't wait to enroll as a freshman, early decision might be the way to go. When you apply to a school early decision, you find out your admission status earlier than other candidates and enter into a binding agreement with the school, committing to enrollment. Deadlines for early decision applications are usually in early November, while regular decision applications are due around January. Early decision candidates are usually informed of their admission status by early January.

If you apply early, you'll know where you're headed much sooner than most of your friends. And some research even indicates that your chances of getting in are better if you apply early decision [source: Kaplan].

Sounds likes a pretty sweet deal, right? And it can be, if you're certain that you'll be able to attend a school regardless of the cost of tuition. But what if you know you'll need to rely on financial assistance to attend a school? With college tuition costs soaring to more than $40,000, many people need aid in the form of grants, scholarships, loans and work-study positions. If you enter into a binding agreement with a school, you won't have the opportunity to compare aid packages between schools in the spring. If you accept an early decision admissions offer, you're eliminating the possibility of negotiating one offer based on another school's offer.

Despite the financial uncertainty that might come with applying early decision, it's generally a popular option for both applicants and universities. In addition to potentially giving the student a better chance at admission, early decision guarantees the college a student who's committed and willing to pay whatever the tuition fee might be.

Like most of the college-admission process, choosing an admission plan can be complicated and will vary depending on the school to which you're applying. On the next page, we'll take a look at the factors that influence the decision to apply early and what motivates colleges to accept both early and regular decision applicants.

When deciding what admission plan is best for you, it's best to consult each individual school to which you're planning to apply. Do some research on their Web sites to learn about the rules for early decision and financial aid. Give their admissions offices calls or visit their campuses. You should speak with someone in the financial aid office during your junior year of high school to get an idea how financially viable the school is for you and your family. If you're really concerned about what your financial aid offer will be, you should bring your family's tax forms, so the financial aid office can give you a ballpark figure on what your expected contribution to tuition would be. Admissions personnel should be frank about what would work best for you.

If you're not afraid of commitment and are absolutely, positively sure that you can bind yourself to one school, early decision might be the choice for you. Applying early decision doesn't eliminate the possibility of receiving financial aid; you may even receive more aid than you anticipated. You will have the first crack at the money available for financial aid before regular decision candidates are considered. Schools such as New York University automatically consider early decision candidates for merit-based and need-based aid and may include a financial aid award with your early admission offer [source: NYU]. Hopefully your school will be just as invested in you as you are in it and will offer you as much financial aid as you need. The only downside is that you won't be able to compare offers from other schools.

However, if money is going to be a major factor in your decision to attend a school, early decision might not be a viable option. For example, Wake Forest University recommends that prospective students who will require financial aid apply regular decision in order to compare financial assistance packages in the spring. Both their merit-based and need-based financial aid decisions aren't made until April. Wake Forest even encourages students who have applied early decision to change their admission program to regular decision if they haven't given enough thought as to how financial aid will affect their ability to attend the university [source: WFU].

If you absolutely love a school but are worried about how you'll foot the bill if you don't receive enough financial aid, there's an alternate admission option. If you want to find out your admission status early but you need to compare aid packages, early action might be right for you. Early action allows you to apply early and find out your admission status before the regular decision population, but still allows you to compare offers from other schools. While early decision is binding, early action is non-binding. You can find out if you've been accepted, look at financial assistance options and then make a decision in the spring. While not all schools have an early action options, many top-ranked schools like Georgetown, Massachusetts Institute of Technology and Boston College have the program in place.

For more information on college admissions, visit the links on the next page.