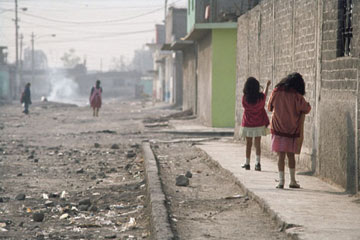 The poverty-stricken in Mexico are subject to high interest rates on microloans they take from banks that are cropping up to serve the working poor in that country.
Adalberto Rios Szalay/Sexto Sol/Getty Images

A plethora of studies have emerged since the late 1990s that reject the notion that microlending can work to help end poverty in the developing world. For some, the jury is still out on the veracity of microlending: "We're strikingly devoid of evidence," says one Yale economist [source: Epstein and Smith].

Whether it works or not, microlending has inadvertently cast the very poverty-stricken people it was established to help even further in debt. The success of Grameen Bank and other microlending institutions founded to combat poverty shed a light on what has generally been a vastly overlooked segment of the population: the poor. Microlenders served as a sort of litmus test for traditional lenders, proving -- with a 97 percent repayment average -- that the poor can be trusted to repay loans. In some cases, repayment is made no matter the terms, and some banks have begun to exploit poor borrowers.

A pair of BusinessWeek articles published in 2007 exposed two Mexican banks -- Banco Compartamos and Banco Azteca -- that have emerged specifically to lend to the poor. Using the same model that microlending institutions pioneered, like "bankers on bicycles" for collection and social pressure as a technique to encourage repayment, these banks have been making money by lending small amounts to the poverty-stricken. Unlike microlenders, however, these banks often drive the poor further into debt.

This is due to the high interest rates charged by banks that exploit the poor. Annual percentage rates (APR) often reach more than 100 percent, meaning the borrower must pay twice the original loan amount over the life of the loan [source: Epstein and Smith]. Because these loans are made in traditional societies, repayment rates are as high as microloans made through lenders established to alleviate poverty. Borrowers tend to repay the loans, no matter what the terms -- which in many cases don't have to be disclosed to the borrower.

The corruption of the microlending spirit isn't a specifically Mexican problem. Companies firmly entrenched in the developed world like Citigroup, HSBC Holdings and Zurich Financial Services have purchased stakes in highly lucrative Mexican banks that lend to the poor.

This high rate of return on investment is certainly good for microlenders looking to turn a profit off their loans; those who view microlending as a socially responsible means of investment would be wise to research what these loans would mean for the recipients.