The Spirit and Techniques of Microlending Practices 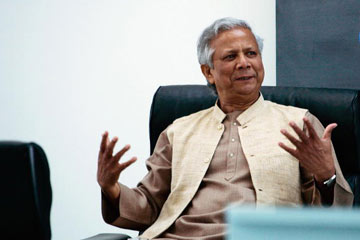 The word microlending makes the concept sound like it's concerned with very small loans. Indeed, this is usually the case in the developing nations where the bulk of microlending takes place. It's not the dollar amount that necessarily makes a loan a microloan; it's the criteria that borrowers must meet.

Microloans traditionally go to those who are overlooked by large, traditional lenders: the poor, women, those without collateral, entrepreneurs who are stepping into a new field. Microlending pioneer Muhammad Yunus, a Bangladeshi economist and founder of microlender Grameen Bank, described the practice, "If banks lent to the rich, I lent to the poor. If banks lent to men, I lent to women. If banks required collateral, my loans were collateral free" [source: Lovgren]. Grameen Bank's loans also went to the illiterate and those in remote and poverty-stricken rural areas where no banks existed. In 2006, he won the Nobel Peace Prize for his work.

Yunus wasn't the first person to come up with the idea of lending money to people traditional banks reject. Microlending bears a striking similarity to borrowing from loan sharks; it serves borrowers who are viewed as unsuitable for loans from more traditional channels. In fact, microlenders are usurping business from loan sharks in some countries, mainly because there's no threat of violence associated with microlending and interest rates are much lower. The average interest rate on microloans made worldwide is 31 percent [source: Epstein and Smith].

Rather than threatening to break the legs of errant borrowers, microlenders like Grameen Bank and others rely on social pressure to ensure loan repayment. Many traditional societies maintain strict social codes pertaining to repaying what is borrowed. In other words, failure to repay on time places the good name of a borrower's family on the line. Grameen Bank also lumps disparate borrowers into groups. Further lines of credit are opened only when all of the borrowers in a certain group are making payments on their loans.

Microlenders also employ what they call "bankers on bicycles." These are collection agents that make weekly visits to borrowers to collect payments. This method of collection helps ensure repayment of the loans made to entrepreneurs in developing nations because it's convenient for the borrower. The social pressure of a personal visit from a neighbor who works for the lender also increases the likelihood for repayment.