Rudyard Kipling's poem "The White Man's Burden" calls its European audience to "send forth the best ye breed" and "serve your captives' need." In other words, Kipling is telling well-bred Europeans they have a responsibility to help the people they conquered. The poem, now considered misguided and racist, sums up the curious and contradictory attitude Europeans had toward colonized peoples in the 19th century.

Missionary work in the 19th century struggled to reconcile colonialism and Christianity. As European powers spread their economic dominance and influence throughout the world, devoted Christians saw their opportunity to reach and convert "savages" -- that is, non-Christians. In their minds, this was the only way to save these remote people from eternal damnation (and in the process secure their own salvation). In addition, missionaries often worked to build hospitals and educate natives.

However, modern sentiment is that missionaries (those who set out to convert others to their religion) merely gave Europeans an excuse to rationalize their abusive economic practices. They are also accused of pushing Western ideas and customs while squelching native cultures. Today, many people tend to think of these missionaries as religious zealots who carelessly trampled on other cultures -- despite seemingly good intentions. Whether or not you believe missionaries deserve this reputation, it will help you better understand the role of missionaries throughout history and today.

So how did mission work begin? In the Gospel, Jesus asked his apostles to go out and "make disciples of all nations" [source: USCCB]. And, according to the Acts of the Apostles, Jesus' followers received their mission in a sweeping sign from God. On a day known as Pentecost, the apostles were gathered together, not long after they saw Jesus rise from the dead and then ascend to heaven. Suddenly, they heard a loud noise of rushing wind and saw "tongues of fire" come and descend on each of them [source: USCCB]. These tongues of fire gave them the ability to speak in different languages. Throughout the history of their religion, Christians (both Catholic and Protestant) have interpreted Pentecost as a call to spread their faith to people the world over.

Of course, Christians aren't the only kind of missionaries, but because they have been the most historically influential (not to mention controversial), they're the main focus of this article. However, we'll talk about missionary activity in other religions later on.

Over the next 2,000 years, Christians were pretty successful in their mission. The early Christians saw an especially urgent need to spread their faith before the second coming of Christ, which they believed was imminent. Paul, a former persecutor of the Christians, became one of the most influential leaders in the mission movement after he experienced a dramatic conversion to the faith. He became known as the "Apostle to the Gentiles" and traveled extensively on three missionary journeys to preach.

Christians were persecuted for the next three centuries until the emperor Constantine legalized the religion. Evangelization became much easier. St. Patrick became a kind of missionary in the fifth century when he was kidnapped and taken captive to Ireland, where he worked to convert the people. When barbaric tribes threatened the Roman Empire, they often ended up adopting Christianity. The Frankish ruler Clovis, for instance, converted in the late sixth century. Many of the converted Franks and Anglo-Saxons became missionaries in their own right [source: Encyclopaedia Britannica].

Organized missionary activity flourished after the outbreak of the Crusades in the second millennium. Christianity and Islam were two conflicting religions that spurred the fight over access to and control of the Holy Land in Jerusalem. Amidst all the violence during this era, members of the Franciscans and other religious orders became missionaries in attempts to peaceably convert the Muslim people. These attempts weren't very successful, however.

Things changed dramatically in the next few centuries with the rise of European exploration and colonialism. While explorers sought and found new financial opportunities around the globe, missionaries saw new proselytizing opportunities in the newly discovered populations. The Protestant Reformation had also occurred in the meantime, dramatically splitting Christians throughout Europe. We'll touch on some of the most notable Catholic and Protestant missions in the next few pages.

Missionaries in the Age of Exploration

Beginning late 15th century, Catholic Spanish and Portuguese monarchs commissioned voyages to colonize the new lands and asked missionaries to come along. When Vasco Da Gama arrived in India in 1498, sure enough, a missionary was with him. Later, Jesuit missionaries would become especially influential in India.

Francis Xavier was a Jesuit missionary who was chosen to go to India at the behest of the Portuguese king. He arrived in 1542 and soon learned the local languages. Xavier was then able to preach to the people in their native tongue as well as translate the Apostle's Creed and the catechism into their language. In less than 20 years, Jesuits had baptized thousands of Indians [source: Mullin]. Xavier also traveled to other parts of Asia. In 1549, he came to Japan and found friends among influential political leaders. Within a few years, thousands of Japanese converted, and Nagasaki became a successful center of Christian missionary work in Japan. However, in the early 17th century, Christianity was outlawed and foreign missionaries were forced out [source: Mullin].

Robert de' Nobili, another important Jesuit missionary in India, did more than learn the local languages -- he enveloped himself into the culture. After adopting Indian garb and a vegetarian diet, he attempted to convert Hindus who adhered to the caste system and were hesitant to adopt Christianity. In a series of controversial compromises, de' Nobili encouraged converts by allowing social divisions within worship.

Jesuit missionaries also ventured into China and saw fleeting success. Jesuit Matteo Ricci adopted Chinese culture and clothing and attempted to assimilate Christianity into the local tradition. However, the Vatican ultimately disapproved of his choice to allow Confucian ceremonies that honor ancestors, and the Jesuits lost influence in China afterward.

Early Spanish and Portuguese dominance in the Americas allowed Franciscan, Dominican and Jesuit missionaries to prosper there, too. Such missionaries taught natives Catholicism along with farming techniques and other trades in addition to building hospitals and schools [source: Duiker]. They established dioceses and performed large-scale baptisms.

However, a social divide pervaded, and Native Americans weren't allowed to become Christian priests for more than a century. The native population suffered under harsh treatment from civil leaders. Some historians criticize the Christian church for not speaking out against this treatment and blame missionary activity for making natives more vulnerable to such abuses.

Missionaries in the Great Century

In the late 18th century, a humanitarian spirit and abolitionist movement took hold in Europe, prompting various Christian organizations to venture out to start missions around the world. Because of the vast missionary activities of the 1800s, it became known as the Great Century.

One of the earliest of these organizations was the Baptist Missionary Society, founded in 1792 by William Carey, one of the most prominent missionaries from this era. Convinced that Jesus' call to "make disciples of all nations" was still relevant, Carey traveled to India and translated the Bible into dozens of different languages. He also helped establish schools and improve natives' agricultural practices. Another of Carey's contributions was eradicating the Indian practice of sati -- the burning of widows on husbands' funeral pyres. Because of all his accomplishments, Carey became known as the "father of modern missions" [source: Eckman].

Africa was the center of much missionary work during the 19th and 20th centuries. During this time, various European powers were penetrating and carving up the continent for control. Established in 1795, the London Missionary Society (LMS) was very active in Africa. LMS missionaries were typically average Europeans from humble backgrounds. In many cases, missionaries in Africa sought not only to Christianize natives, but to Europeanize them through dress and culture [source: Ferguson].

David Livingstone, the most famous missionary of the Great Century, joined the LMS in 1838. After years of service, his mission work took a backseat to a career in exploration. Livingstone's goal was to open up more of the African continent to Christianity, trade and civilization. A highly educated and avid abolitionist, Livingstone earned fame for his explorations and inspired many other educated young men to become missionaries [source: Glazier].

Not all missionaries who traveled to Africa were European and Protestant -- many came from the United States. Lott Carey, a former slave, became a prominent American missionary. And Catholics were likewise swept up in the mission craze of this era. Religious orders such as the White Fathers and Holy Ghost Fathers formed to do mission work in Africa.

Missionary activity waned by mid-20th century, partly because it fell out of favor and partly because it had largely succeeded in establishing permanent parishes. Missionaries' efforts resulted in so many conversions that even today, African Catholic clergy come to the United States to serve in the priesthood [source: Glazier].

The marriage of convenience between missionaries and colonialism has long been controversial. Even those missionaries who opposed slavery and political imperialism are accused of cultural imperialism. However, some historians argue that missionaries themselves usually had pure intentions, evidenced by the fact that they knowingly risked disease and difficult living conditions to do their mission work [source: Jenkins].

Largely because of their widespread influence in the Great Century, we usually associate missionaries with Christianity. However, other religions have sought to spread their faith through mission work as well. In fact, Buddhists were responsible for the first wide-scale missionary work. The religion holds that its tenets are universal and meant for all people around the world [source: Jestice].

As early as the third century B.C., King Asoka asked Buddhist missionaries to go and spread the religion beyond India. These missionaries went to several surrounding lands, including Thailand and Sri Lanka. Buddhism's presence continued to grow gradually in the ensuing centuries. By the fifth century A.D., missionaries established the religion in Java and had introduced it to other regions.

Buddhist missionaries have continued their work ever since. In the 18th and 19th centuries, Tibetan monks proselytized to peoples of the Russian Far East. And in the 20th century, Japanese scholar D.T. Suzuki was influential in increasing the popularity of Buddhism in the West.

Islam is another religion that has employed missionaries. Throughout its history, Islam spread chiefly through military conquest, but missionary work played an important role. For instance, Islamic missionaries would often proselytize to recently conquered peoples, establishing a stronger understanding of the faith and more earnest conversions [source: Jestice]. Islamic missionaries would even venture into unconquered lands to preach [source: Emerick]. Islam never had anything like Catholic missionary orders, but it did start to establish missionary societies by the late 19th century [source: Boorstin].

Some evidence points toward Jewish proselytism, too. A reference in the Gospels suggests that certain Jews would travel long distances to convert others [source: Matthew]. Today, missionary work is not a priority in traditional Judaism like it is for many Christians. Rabbis don't treat requests for conversion lightly. Rather, they challenge or even dissuade prospective converts in order to force them to think seriously about their choice [source: Cohn-Sherbok].

Now that technology has reached most corners of the world, it might seem that traditional missionaries are a thing of the past. But missionaries carry on their work today in several adapted forms. Many devoted Christians still feel an obligation to convert non-Christians -- both foreign and within their own societies. However, mission work in underdeveloped nations has largely become as much (or more) about aid as religious conversion.

Despite the controversy that surrounds the history of missionaries, for the most part their willingness to face hardship and struggle has been testament to their iron spirit and desire to help others. 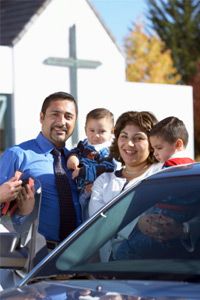 Up Next
How Faith-Based Organizations Work
Explore More 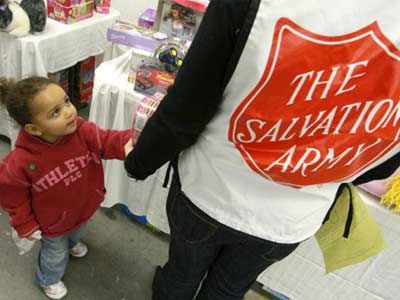 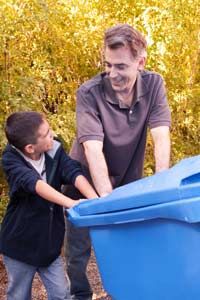