by Libby Little
NEXT PAGE 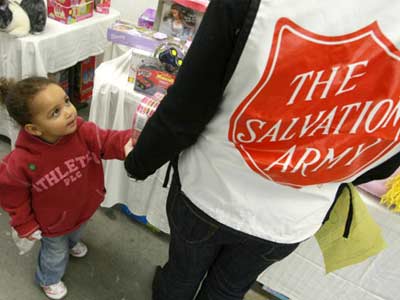 At the mention of the phrase "Salvation Army," it's likely you'll immediately imagine a person standing outside a local store with a bell and a bright red bucket. The bell is to get your attention. The bucket is to receive your donation. If you've ever wondered what happens to the money you deposit in that red bucket, consider this: From 2006 to 2007, the Salvation Army assisted almost 29,000,000 people at roughly 7,600 service centers [source: The Salvation Army].

William Booth created the Salvation Army in the late 1800s. Booth believed in taking the Christian message outside of the church to get directly to the people. He became known as an "independent traveling evangelist." The fact that Booth's small group of followers withstood the test of time and now has more than 3,000,000 volunteers speaks to the strength of his ideas and goals [source: The Salvation Army]. Former Wall Street Journal columnist and management expert, Peter Drucker referred to the Salvation Army as the most effective organization in America [source: Jones].

It's all too easy to walk right past the person with the bucket -- to duck your eyes and look at the ground. You're in a hurry. You need your money for groceries. But, if you can't offer money for the organization, you can offer your time. Volunteering with the Salvation Army is easy and extremely rewarding. In this article, we'll look at the mission and jobs of the organization.

Read on to learn more about this honorable group.