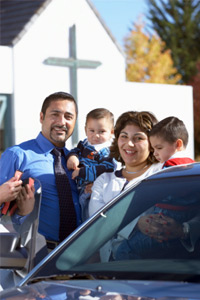 Faith-based organizations are grounded in the belief that they have a religious obligation to help the poor and disadvantaged.
SW Productions /Photodisc/Getty Images

Thieves, prostitutes, gamblers and drunks were all welcome at the sermons William Booth gave in a tent in the East End of London in the 1860s. In fact, they were some of the evangelical minister's most devout followers.

While other churches rejected them because of their sordid pasts, "The General" as Booth's congregation came to call him, preached salvation for all people, particularly the poor and "undesirables." As his "army" of followers grew into the thousands, one moved to Philadelphia in 1879, marking the birth of the Salvation Army in the United States [source: Salvation Army].

Today, the Salvation Army is one of the largest social services providers in the world, running homeless shelters, community centers, disaster relief programs and thrift stores in 118 countries.

It is also a faith-based organization -- one of thousands of charities in the U.S. whose missions are grounded in the belief that they have a religious obligation to help the poor and disadvantaged. They differ from secular charities like the Red Cross and United Way in that their call to serve is based on scripture from the New Testament, the Torah, or other religious texts.

In fact, 70 percent of the United States' food pantries are run by faith-based nonprofits, as are 27 percent of emergency shelters and halfway houses. Moreover, one out of every six child-care centers is run by a church or synagogue [source: De Vita].

Read on to find out how they get their funding.

Historically, federal and state agencies have been prohibited from contracting with faith-based organizations to provide these services because the U.S. Constitution mandates a separation between church and state. Over the years, however, a series of laws have included provisions allowing government agencies to contract with religious organizations to provide social services needed to carry out the goals of that law.

In 1996, Congress passed a welfare reform law that instituted a major overhaul of the system that shifted the focus from providing cash assistance to helping poor people find jobs. A provision of that law allowed states to use their Temporary Assistance to Needy Children (TANF) block grants from the federal government to contract with faith-based organizations to provide services such as job training to welfare recipients [source: De Vita].

A similar provision was also in the Substances Abuse & Prevention & Treatment Block Grant created in 1992, which allowed treatment centers run by faith-based organizations to receive public funding. As a result of these provisions, faith-based organizations receive millions in federal funding each year. Catholic Services, for one, gets 65 percent of its funding from the government [source: Salmon].

To address the potential violations of the separation of church and state doctrine, these laws prohibit faith-based organizations from using public money to support "inherently religious activities," such as worship or evangelism. The organizations also have to offer clients who don't want religious counsel the alternative of switching to a secular program [source: De Vita].

Read on to find out how you can help.

Taking It a Step Farther

In 2002, President Bush stepped up his efforts to funnel federal money to faith-based organizations by establishing the Compassion Capital Fund, which encompassed two grant programs. One provided more than $100 million to teach religious organizations how to get access to public funding. The other administered mini-grants of up to $50,000 directly to faith-based organizations that ran programs such as "healthy marriage" initiatives and served populations such as at-risk youth and the homeless [source: De Vita].

Helping faith-based organizations includes everything from donating clothes and furniture to the Salvation Army to volunteering at Theodora House, a halfway house in Indianapolis for women transitioning from prison back into the community [source: Volunteers of America].

Most of these organizations have training programs for volunteers. You can find details of how to get involved on their Web sites. How evangelical they are while administering social services vary from charity to charity. One faith-based after-school program for kids uses Bible stories in its reading comprehension tutoring. Another requires its substance abuse patients to attend chapel.

Others, however, have a historical basis in religion but don't necessarily preach the gospel while providing food, shelter and other services to the disadvantaged.

For more on volunteering and faith-based organizations, see the links on the next page.