The Everything Store: Walmart 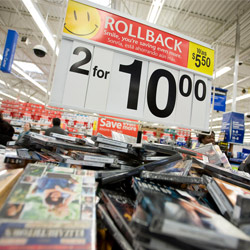 Sam Walton was able to take an emerging idea and apply it to a new market..
Jeff Zelevansky/Getty Images

Like Henry Ford, Sam Walton was a businessman who recognized a good idea when he saw it and, more importantly, knew how to apply it in a way that would have the biggest impact. As a result, the company he founded, Walmart, is now the largest retailer in the world.

The advent of supermarkets in the 1930s proved to the business world that cutting costs to deliver low prices can turn a profit. Retailers brought this logic over to general stores soon afterward. By sparing the frills and getting back to the bare necessities, stores could save money on presentation. They also saved money by cutting back on personnel, which meant less personal service. But saving money in these areas meant the store could charge competitively low prices, which drew customers in despite the bare-bones setup.

Walton saw that general stores were turning a good profit, but he found a way to perfect the business model. Instead of catering to heavily populated areas, which conventional wisdom would advise, Walton started building stores in rural areas. Specifically, he built stores in towns with populations of 5,000 to 25,000 people [source: Magretta]. Customers preferred to shop at these stores rather than drive to the nearest city. Because Walton was the first to go after these small markets, he had a significant advantage over any competitor that dared enter that terrain afterward. Today, Walmart wields so much power that a company's survival may depend on landing a deal with the retailer.