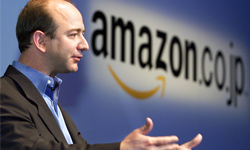 Why pore through bookstores for an unpopular title when a click can get it delivered to your door -- and for a competitive price to boot? Jeff Bezos knew his website would pay off.
TORU YAMANAKA/AFP/Getty Images

In the mid-1990s, entrepreneurs were scrambling to find ways to take advantage of a tool emerging from infancy and bound for great things: the Internet. Although it was thought to be a considerable gamble at the time, Jeff Bezos's plan was one of the few that ultimately worked. His business model proved the axiom "slow and steady wins the race" -- even on the information superhighway.

Challenging brick-and-mortar bookstores, Bezos started Amazon, an Internet company that sold a wider collection of books than stores could carry. Bezos bought warehouses to hold a vast inventory so Amazon could offer direct-to-consumer service. The catch? He and his investors had to postpone seeing profits [source: Roncal]. Bezos allowed readers to criticize products through reader reviews, and he built a faithful community of users. And like Dell, Amazon earned interest on immediate customer payments before paying its suppliers.

Although it didn't see profits until the early 2000s, Amazon survived the burst of the dot-come bubble. It began offering products ranging from CDs and electronics to apparel. Amazon also fueled profits by acting as a portal for third-party affiliates, who handled the warehousing while the company took a share.

Putting off profits for the sake of growth earned Bezos plenty of critics, but his model ultimately paid off. By creating a business that sought customer convenience first and foremost, Bezos defied the odds and came out swinging.