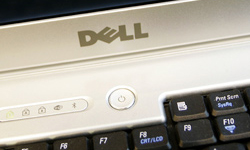 Want a made-to-order computer in a week? Go to Dell.
Chris Hondros/Getty Images

"A huge inventory!" You hear companies boast this on commercials, and it sounds like a great thing. However, for many businesses, inventory is a bane. Until Dell came along, a vast inventory was considered a necessary evil for computer companies, who watched as their shelves of pre-ordered parts grew outdated by the second.

Dell adopted a process Toyota used first in the 1960s called the Just-in-Time (JIT) method. Under this process, Dell no longer had to predict the right parts to order. Instead, it almost completely eliminated inventory. At one point, this meant keeping one week's worth of inventory on hand, and later as little as two hours' worth of supplies [source: Holzner].

The JIT method combined with Dell's direct-to-consumer process made for a dynamite business model. In the end, Dell was able to cut out the retail middleman and instead sell its products directly to the consumer. This cut down on costs (resulting in a competitively low price for the consumer), and it also contributed to faster service.

Customers order what they want, and after they pay, Dell orders the necessary parts from suppliers and builds the custom PC. Dell can wait up to a month before paying its suppliers, so the company earns interest on customer payments in the meantime.

Dell raised consumer expectations for good, fast service in the PC industry -- and companies such as Apple are following suit. The Dell business model paved the way by streamlining and increasing efficiency on the supplier end [source: Breen].