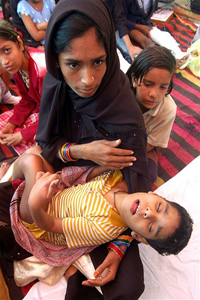 In 2007, a Bhopal resident carries her 10-year-old sister born with congenital abnormalities linked to the disaster.
AP Images/Prakash Hatvalne

On December 3, 1984, a gas leak at the Union Carbide pesticide plant in Bhopal, the capital city of the Indian state of Madhya Pradesh, created a poison cloud that drifted toward the city as the residents slept. Within days of the leak, 8,000 of the city's inhabitants died. In total, another 25,000 residents have succumbed from the effects of the gas leak. It's widely viewed as the worst industrial accident in human history [source: Long].

After the disaster, the company simply closed the plant and left it abandoned, where it continues to pollute the surrounding area and endanger the health of residents. Massive birth defects, chronic illness and disabilities have all been linked to contamination from the plant. Although investigations into the disaster squarely implicate Union Carbide as negligent in preventing the leak, the company settled with the Indian government for $475 million, while the original suit sought $3 billion.

In 2001, Dow Chemical bought Union Carbide, but maintained the latter company's refusal to clean up the site. In 2004, social satirists The Yes Men posed as Dow representatives and were interviewed on the BBC, where they announced Dow would pay $12 billion in compensation to the city's victims. The value of Dow's shares fell by $4 billion in 23 minutes [source: Democracy Now].